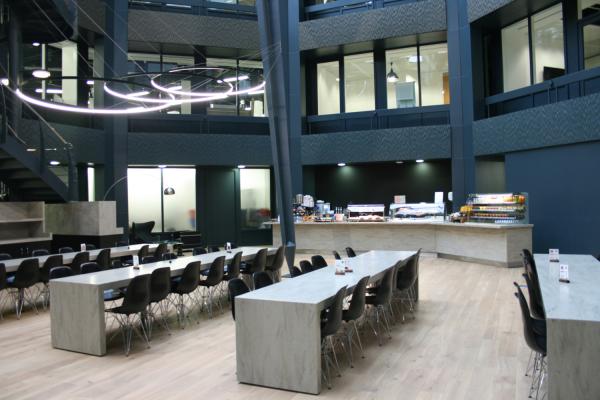 (Fremantle is one of the largest creators, producers and distributors of television brands in the world.) Bennett Hay will be operating the atrium café, providing corporate and event hospitality - and running a Friday workplace bar.

The café/bar has created a ‘creativity hub’ that has helped turn the building’s new atrium into a ‘fun’ space for meetings and networking.

Ops Services Manager, Loes Penz, said: “We’re a creative company. We want the best possible working environment for staff and to work with contractors that understand those values.”

MediaCity to Double in Size as Marketeers and Scallies Move In

Manchester's MediaCityUK is set to double in size over the next decade under ambitious plans submitted to Salford City Council on June 7. Up to ten new buildings...

The Case for Flexible Working

Food Glorious Food for the Workplace

City fine dining specialist Lusso entered a partnership with chef Tom Sellers to take a menu inspired by his Michelin-starred Story restaurant into workplace dining for...

Launched today (19 June), at the NEC in Birmingham, the case studies (which are available to download from www.rics.org/facilitiesmanagement) cross a range of strategic...