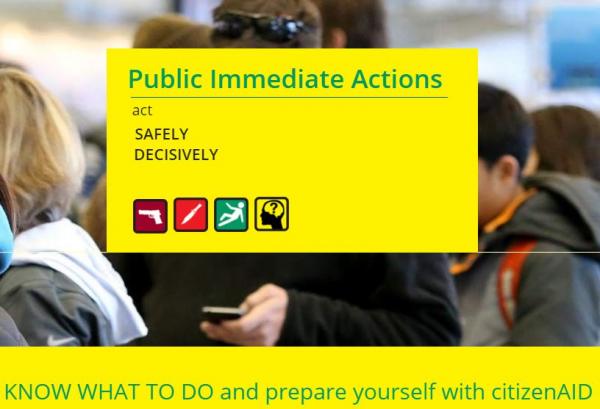 A new system, designed to improve public resilience in the event of a major terrorist attack, has been launched.

Using lessons learnt on the battlefield, military medical experts from the Royal Centre for Defence Medicine in Birmingham have been working alongside the police and the NHS. They’ve been devising a set of simple instructions so civilians know how to react and save lives. A free booklet and an App are now free to download from citizenaid.org.

According to the Chief of the Metropolitan Police, a Bataclan or Nice style or Berlin or Istanbul type terrorist attack here in the UK is a matter of when, not if.

Now, a new protocol developed jointly by military and civilian clinicians aims to plug a gap in the current advice, which tells the public to ‘run, hide and tell’, should they find themselves in the midst of a terrorist attack.

A team of senior military and civilian medics has said people need to know how to help each other because it could take some time before it is deemed safe for paramedics to arrive on the scene.

Although an individual’s chance of being caught up in an incident is small, Brig Tim Hodgetts and Prof Sir Keith Porter, co-developers of CitizenAID, say it is a good idea for people to have a plan and the knowledge and skills to help each other.

“We have learnt on the battlefield in conflict situations that if you unfortunately die, you are probably going to die quite quickly, and you are going to die from bleeding! So we have to have the knowledge and equipment to actually stop external bleeding," Brigadier Tim Hodgetts CBE, Medical Director, Defence Medical Services, told ThisWeekinFM.

The Citizen Aid instructions and a brand new App can be found on the citezenaid.org website and give members of the public tips on how to deal with casualties in the aftermath of a terrorist attack. The instructions are as picture-based as possible, which prevents problems with language barriers or literacy.

Brigadier Hodgetts explains that the origins of CitizenAid actually go back to the 1980s. “I had only just qualified as a doctor in 1986 when I first realised you didn’t need any equipment to save a life. Well before the age of the mobile phone I stopped at night on a dark country road at a road accident. The teenage driver had lost his arm above the elbow and was bleeding heavily. There was no time to wait for help. I improvised a tourniquet with his belt. He survived. 2 years later he won a gold medal at the Seoul Paralympics.

"As if I needed another prompt to follow a career in emergency medicine, in 1991 I was in a hospital in Belfast that was destroyed by a terrorist bomb. I acted as the Medical Commander during the rescue of those colleagues injured and killed. Reflecting on this experience I was convinced that to do better in the future we must have a simple system that could be applied to any incident. A system that would take away the initial uncertainty of what to do first, when there is so much to do. A system that would help to prioritise the injured, so the limited resources can reliably be used to treat the most seriously injured first.

"This was the birth of the ‘MIMMS’ course, developed with colleagues in Manchester and based on 7 principles -command, safety, communications, assessment, triage, treatment and transport. It has become the international standard for professionals at the scene of a major incident.

"I realised in 1998 that we needed a simpler approach for individual soldiers, should they have to manage multiple casualties from combat. The MIMMS principles were therefore distilled to become ‘Control then ACT’ (Assess, Communicate, Triage) and introduced within the new Battlefield First Aid course for the British Army. This precept has endured throughout recent campaigns in Iraq and Afghanistan and has credibility as a simple framework to provide initial scene organisation. This is the structure applied within CitizenAid but in the context of a shooting or bombing occurring at home in the UK.

"CitizenAid is therefore grounded in deep and practical experience. The underpinning concepts have been tried and tested in numerous multiple casualty incidents involving blast and gunshot casualties during conflict. The treatment recommended reflects those skills that can be applied by people without medical training to save lives. The value of these skills has been clearly shown through year on year improvements in survival from serious combat injuries. These ‘unexpected survivors’ have depended on advances in hospital treatment. But more than this, they have depended on the skills of individual soldiers to allow the patient to reach hospital alive. This compares directly to the ability of the public to intervene with life-saving intervention. It is the rationale for citizenAID. We have a duty to transfer the hard won medical lessons from recent conflict to the wider benefit of our public.”

A young man, teenager Haroon Ali Syed, whose PIN code for his phone was 'ISIS' was sentenced to life imprisonment on Monday June 3. He will serve at least 15...