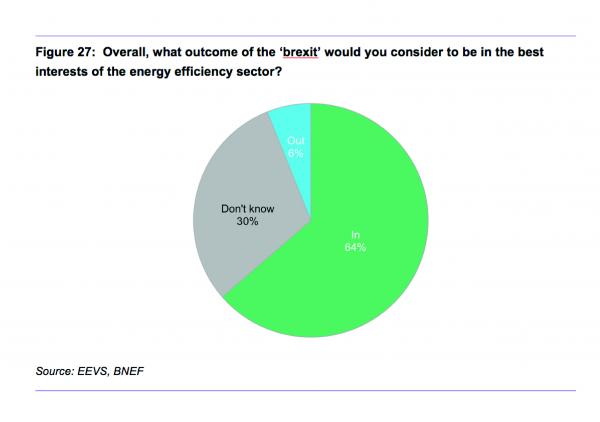 The latest issue of the UK Energy Efficiency Trends report shows suppliers and consumers particularly concerned that energy prices would rise if the referendum results in a Brexit.

Commercial and industrial consumers expressed concerns that the cost of buying energy saving technologies may also rise and that the potential roll back of EU-led policy initiatives by UK governments could increase uncertainty and undermine the business case for energy efficiency investments.

Both suppliers and consumers were broadly positive about the impact of EU policy initiatives on the UK's uptake of commercial sector energy efficiency initiatives. On the supply side, respondents agreed that the following EU policies had had a positive impact:

The report showed that uncertainty around Brexit had impacted 60% of supplier respondents' business investment decisions but had no impact on EU-based orders, staff recruitment or sale prices.

Commenting on the findings, Ian Jeffries, Director at EEVS, said: "From this research we see that the UK energy management sector has planted itself firmly in the 'remain' camp on the Brexit debate.

"As well as an expectation that 'leave' would drive up the capital cost of energy saving technologies for consumers and lead to higher energy prices for all, both suppliers and consumers were fearful that the UK government's poor record on energy efficiency would see well-established and popular EU policies that support energy efficiency, such as energy performance certificates in buildings, being scrapped to the detriment of the sector."

Michael Rudd, partner specialising in energy management at international law firm Bird & Bird, said: "The EU has played a key role in energy management to date, through setting targets and legislating to improve energy efficiency in buildings and products. It has also provided some certainty in the energy management sector and contributed to investors' confidence; the intangible effect on investor confidence may be the most important consequence of any Brexit.

"Some are concerned that Brexit could lead to the UK government moving away from new law or policy requiring energy management improvements, certainly when faced with criticisms from certain stakeholders regarding the current policy framework.

"Others argue that a Brexit could result in the UK government and industry supporting and possibly requiring further energy efficiency improvements, perhaps as the government pulls further back from subsidising renewable generation.

"We are seeing growing momentum in the market now, regardless of the Brexit referendum; driven in part by the UK's proactive energy consumers and other key stakeholders, but also by commercial requirements and the business impact of (high) energy costs.

"Our view is that the competitiveness of UK industry demands higher energy productivity, whether Britain remains in the EU or not."

Richard Singleton, Managing Director, Corporate, at Bellrock said: "As a UK based business with international clients, the uncertainty reflected in the report over the potential Brexit is certainly reflected by our own experience. Decision-making is stagnating, and not just for energy efficiency projects, although this is not as true for our healthcare and education sector clients.

"We often experience a similar but more wide-reaching slow down, coming up to a general election, however unlike an election there are ramifications beyond the decision from the referendum. The long term trend for lower capital projects will probably continue therefore, until such a time as there is confidence in the clarity for trade and stability for the economy in general."

The report is delivered by a research partnership between EEVS and Bloomberg New Energy Finance, and is supported by Bird & Bird and Bellrock.

Picture: The graph shows conclusively that a vote for leave would see seas rise and a plague of locusts descend on the Scepter'd Isle