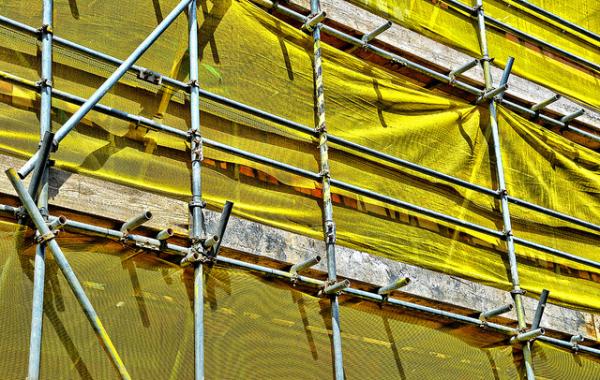 A construction company has been fined after a worker suffered life changing injuries after falling from scaffolding.

Bristol Magistrates’ Court heard how an employee of RJ Scaffolding (Bristol) Limited was in an induced coma for two weeks after falling more than six metres from the scaffolding. The worker suffered several serious injuries including losing the sight in his right eye and five fractures to the skull.

An investigation by the Health and Safety Executive into the incident which occurred on 2 June 2016 found the employee was untrained, the supervisor was unfamiliar with the current expected safety techniques and the appropriate equipment had not been provided to the worker to conduct this work safely.

Speaking after the hearing HSE inspector Ian Whittles said: “Those in control of work have a responsibility to ensure safe methods of working are used and to inform, instruct and train their workers in their use. If industry recognised safe systems of erecting scaffold had been in place prior to the incident, the life changing injuries sustained by the employee could have been prevented.”

A Wiltshire based asbestos removal company and one of its Directors have been sentenced after removing licensable asbestos materials in an unsafe manner.

Winchester Crown Court heard that on 8 March 2013 the HSE received a concern from an employee of a construction company hired to demolish the Forresters Respite Centre in Hythe.

Sarum Asbestos Limited (SAL) had been contracted to conduct an asbestos survey and then arrange for the removal of any identified asbestos material before demolition work could begin on site.

An investigation found that Sarum Asbestos Ltd had undertaken similar work in other locations and failed to ensure that this work with asbestos was undertaken in a safe manner by competent personnel. They also failed to undertake further testing on these sites to ensure that the asbestos had been removed safely and as a result placed workers at risk of exposure to asbestos fibres, as well as putting members of the public at risk.

Sarum Asbestos pleaded guilty to the six charges: Sections 2 and 3 of the Health and Safety at Work Act 1974 for the work conducted at Forresters Respite Centre. These charges concern risks to their own operatives and members of the public.

The company also pleaded guilty to the same charges for work conducted at Corsham Police Station.

Sarum Asbestos Ltd also pleaded guilty of breaching Regulation 11 of the Control of Asbestos Regulations 2012 for work conducted at Moonfleet Manor, Weymouth, regarding a failure to control personal exposures to asbestos.

It also admitted the same charge for work conducted at Camberwell Reform Church in London.

Director Jeremy Uphill also pleaded guilty to the same six charges, and was given a total of six months imprisonment suspended for two years.

Speaking after the hearing HSE inspector Adam Wycherley said: “Both the company and Director have failed to protect their workers and members of the public on a number of occasions and as a result placed them at risk of exposure to asbestos fibres.

“Work with the material the company identified should have been subcontracted to a qualified Licensed asbestos removal company.

“Around 3000 people a year die from asbestos related disease and it is a well-known risk within the construction industry, there is no excuse for putting people at risk when the hazards can be controlled with careful management during work with asbestos containing materials.”

A Dorset based company has been fined after a scaffold collapsed at an industrial unit in Wallisdown, Poole.

Poole Magistrates’ Court heard how Swanage and Dorset Scaffolding and Roofing Limited (SDSRL) had been contracted to erect scaffolding at the industrial unit in Alder Hills Business Park, Wallisdown, Poole to provide edge protection for work to be carried out on the roof.

The scaffolding collapsed on 14 September 2015 narrowly avoiding an office worker as they exited the building but resulting in serious damage to parked cars.

SDSRL pleaded guilty to breaching the Construction Design and Management Regulations 2015. The company has been fined £27,000 and ordered to pay costs of £4,051.

Speaking after the hearing HSE Principal Inspector Helena Tinton said: “The company failed to ensure the scaffolding was properly secured to the building to avoid it putting workers and members of the public at risk of it collapsing in high winds.

“It is very lucky nobody was injured as result of this incident. All duty holders have the responsibility to ensure all scaffolding work is properly designed and installed by competent workers.”

Picture: Scaffolding for illustration purposes only