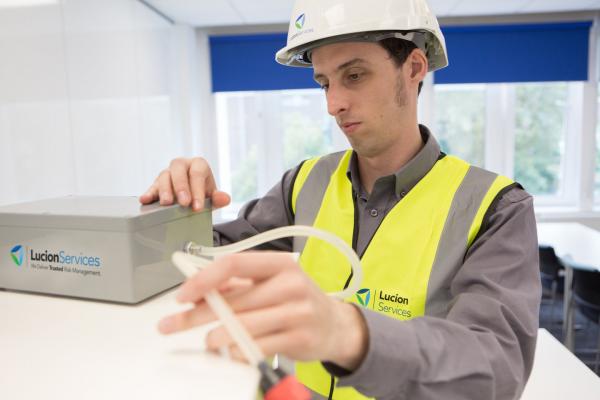 Risk management and occupational safety company Lucion Services has launched a new campaign to highlight the hazards of asbestos containing materials in schools.

A campaign video features Lucion’s MD Dr Patrick Morton warning about the possibility of harmful airborne asbestos fibres finding their way into the classroom and other areas, where they could be inhaled by teachers and pupils.

This can lead to damaging health effects in both teachers and children and in severe cases, people developing fatal illnesses such as mesothelioma after exposure to asbestos.

Thousands of schools built between the 1950s and 1985 are particularly at risk, before the UK outlawed the import and use of some types of asbestos used in building materials and products in 1985.

Asbestos was incorporated into these schools in significant quantities because of its fireproofing and insulation properties and it can still be found in ceiling and floor tiles, decorative textured surfaces and wall panels.

The video forms part of a wider campaign to highlight the problem of asbestos in schools - and more importantly what can be done to enable the risks to be identified and assessed more effectively.

Duty holders and those with school health and safety responsibilities are being encouraged to visit www.lucionservices.com/asbestosinschools/ to find out more about the facts behind the issues.

There remains widespread concern over the potential damage to health from asbestos despite Health & Safety Executive and legal duties on schools that help to cut the risks.

And Lucion says there should no longer be any excuse for anyone being exposed to potentially dangerous levels of airborne asbestos fibres.

Advanced Scanning Electron Microscopy technology can improve the measurement of the amount of airborne fibre than traditional techniques, and should be considered as part of an annual re-inspection programme.

This approach can improve the way asbestos is measured in school premises, enabling experts to better assess the risk and provide recommendations for its safe handling and, if necessary, removal.

Dr Morton said: “There is no 'safe' limit for asbestos for teachers and pupils to breathe and the campaign will help those who have a duty of care in our schools to understand better the situation and the capabilities of modern monitoring and analytical technology.

“Utilising SEM technology gives duty holders a major opportunity to establish new standards of best practice for air sampling and monitoring which will better protect the health and safety of our schools.”

Click here for a copy of the White Paper: ‘Asbestos in Schools: The case for reassurance air monitoring with Scanning Electron Microscopy’

The Health and Safety Executive has published the results of its latest asbestos in schools inspection initiative, which took place in 2013/14. The HSE inspected a...