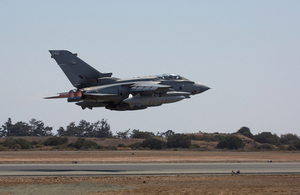 The Defence Secretary has recently confirmed £1.7 billion will be invested to upgrade Scottish military bases. Lossiemouth, one of the RAF's three fast jet bases, is just one of the military establishments that will benefit from the investment in the Defence estate in Scotland.

Sir Michael Fallon has also outlined how Scotland will be home to several additional key Defence capabilities by 2020. He said: "Scotland is on the frontline of defending the United Kingdom from growing threats at sea, in the air and on land. Our commitment to the future of defence in Scotland is underlined by increasing investment in better infrastructure."

Scotland’s 14,000 military regular and reserve personnel and 3,930 MOD civilians are set to benefit from:

Picture: Lossiemouth, one of the RAF's three fast jet bases, is just one of the military establishments that will benefit from the investment in the Defence estate in Scotland

In the most significant changes to defence land since the Second World War, 91 sites owned or managed by the MOD are set to be sold. The latest round of the...