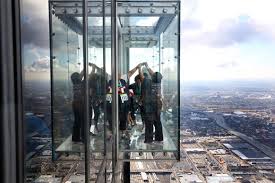 As reported recently on ThisWeekinFM, Chicago is home to skyscrapers that take advantage of their position to entertain visitors at height (click here for previous reporting).

But some at The Willis Tower got the shock of their lives yesterday when the Skydeck they were standing on apparently started to collapse below their feet.

The Skydeck is made up of four glass booths that allow visitors to 'stand over the ledge', 103 storeys up. (All four have now been closed while an investigation takes place.) In one booth three friends were peering down when the glass floor appeared to start to crack below their feet. Curiously, rather than jump back, one of the friends pulled out his mobile phone to record his impending plunge to earth. However, it turned out that it was the coating on the glass that had failed rather than the structural element. The Willis Tower has claimed  that the coating was only in place to prevent scratching - but most glass coatings are also a fundamental strength enhancer. The spokespeople also seem to have dropped a boo boo by claiming the closure was for routine maintenance inspections - a propaganda whitewash that is unlikely to go down well with the public.

"Skydeck Chicago is open today while the protective coating is being replaced," said Brian Rehme, from FleishmanHillard PR. "We have temporarily closed the four Ledge boxes for routine inspection but we hope to reopen them shortly."

The Easter weekend saw pleasant Spring weather but the week before was full of storms that caused injuries and damage to property across the country The beginning of...

Greater Manchester Fire and Rescue Service (GMFRS) was called to an Ikea store in Wellington Road, Ashton-under-Lyne last Saturday morning after reports were made of...