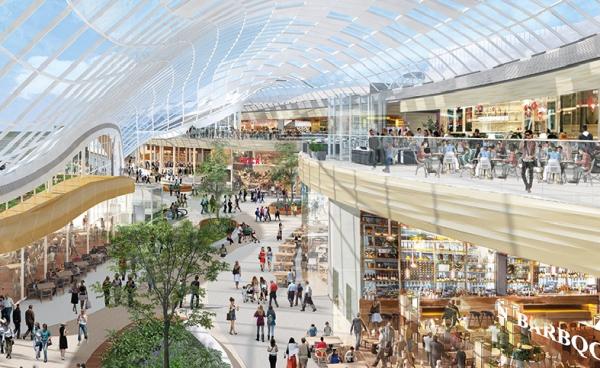 Detailed plans have been submitted for a £300 million extension of Sheffield's Meadowhall shopping centre.

The proposed Leisure Hall at the South Yorkshire centre would create up to 1,400 jobs.The 330,000 sq ft (27,800 sq m) facility would include a new cinema, restaurants, gym and new community spaces.

Joint owner British Land said the extension would 'continue Meadowhall's evolution'. A new cafe court would be built at the Leisure Hall and the existing cinema would be replaced.

The plans, part of a five-year vision to extend the leisure offer at Meadowhall, include: a glazed roof to add dining and entertainment options not currently available at Meadowhall; new internal and external spaces for events and community use; improved accessibility and parking; new pedestrian walkways; electric car charge points; cycle lanes; a new multi-storey car park with 'green walls'; a replacement cinema, with solar panels on the roof to provide around 10% of the extension's energy consumption.

Around 540 jobs would be created during construction, in addition to 1,400 new jobs once the leisure hall is complete.

Sheffield City Council is expected to make a decision on the application in the spring.

Consternation and a degree of anger were caused when the Grosvenor Shopping Centre took the decision to impose a temporary ban on some mobility-impaired shoppers after...