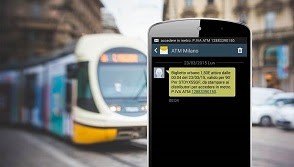 Gemalto has deployed a Netsize SMS ticketing solution together with Milan's public transport company, ATM (Milan), enabling commuters to purchase and use their tickets via their mobile phone.

ATM carries around 700 million passengers a year, and now benefits from a sales channel that is available 24/7 via any type of mobile phone. This service is available to subscribers of the four major Italian mobile network operators.

The Direct Operator Billing solution means travellers in Italy's second largest city can simply send a text to a standard short code number, with the Netsize system charging the fare directly to the customer's regular mobile phone bill. They receive an SMS in return with a code which they show to the bus controller on request or enter into the vending machine in exchange for a printed metro ticket.

The introduction of SMS ticketing comes ahead of the World Expo that is being staged in Milan this summer. ATM expects around 20 million people to visit the city over a five month period. The use of SMS tickets will ensure an effortless travelling experience to and from the event.

"Customers love the ease and accessibility of SMS ticketing, which does away with the struggle to find the right change," said Roberto Andreoli, CIO for ATM. "This new service for ATM marks the third phase of mobile ticketing in Milan and, with the introduction of QR codes, it's also possible to directly access underground lines, after buying a ticket via SMS ticketing."