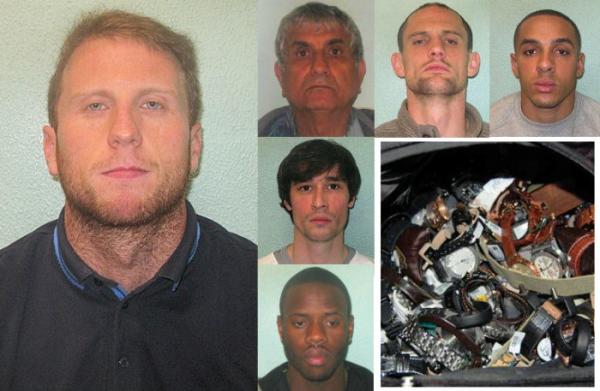 Four men involved in a series of smash and grab robberies across London, dating back as far as 2007, were convicted on Friday, (July 3) at Kingston Crown Court.

Five others previously pleaded guilty to their involvement, including Reece Dunford, of Essex, who played a role in 10 robberies.

Dunford initially carried out a burglary at the warehouse of designer Alexander McQueen in 2007, in which he and accomplices made off with handbags, clothing and laptops, worth around £50,000.

The 31-year-old also made a name for himself by handling stolen goods, before orchestrating his own robbery which resulted in his arrest by Flying Squad detectives just hours afterwards.

Dunford was the ‘go-to’ man for handling high value goods stolen during smash and grabs. As payment he was offered discount items from incidents including a raid on Selfridges in Oxford Street, in which thieves dressed in burkas to escape with more than £1million worth of watches. He bought some of the watches and used Hatton Garden jeweller, Yair Cohen, 71, of Hackney - also convicted on Friday - to sell them on.

Both were arrested by Met Flying Squad detectives just hours after a smash and grab robbery coordinated by Dunford, which took place at Mappin and Webb in Fenchurch Street, City of London, on 28 April 2014.

Dunford handpicked his team of robbers, conscious that police had recent success in arresting smash-and-grab gangs.

At around 10.30hrs, gang leader Vincent Kamara, 28, of Camden, Boz Burbridge, 31, of Camden, David Mays, 33, of Bexley, and Danny St Luce, 29, of Islington, drove up to the City store on two high-power motorcycles. They used one of the bikes to burst through the doors.

Two of the men - believed to be Burbridge and Mays - ran inside, still wearing their motorcycle helmets and armed with sledgehammers and an axe. A third man, believed to be St Luce - waited outside. They threatened terrified members of staff before Kamara directed Burbridge and Mays towards the shop displays with the most valuable watches. They smashed through the glass cabinets and made off with over £300,000 of Rolex watches, leaving the sledgehammers and axe behind at the scene.

The watches were dropped off at a house linked to the gang in Islington but less than three hours later, detectives from the Met’s Flying Squad swooped on the address. In the living room, they caught Dunford and Cohen red-handed, surrounded by the stolen watches with the price tags still attached. Following their arrest, continued enquires led to the arrest of the other individuals involved in the 10 incidents.

Investigating officer, Detective Constable Simon Davison of the Flying Squad, said: "These smash and grabs were aggressive. Sometimes, the robbers threatened innocent people with sledgehammers and axes in order to get to the goods.

“Dunford was involved in every incident in one way or another and clearly started to think he was untouchable. These convictions are proof that the Flying Squad will relentlessly pursue anyone who tries to make a living from crimes like these.”

Picture: Dunford and others with stolen watches.