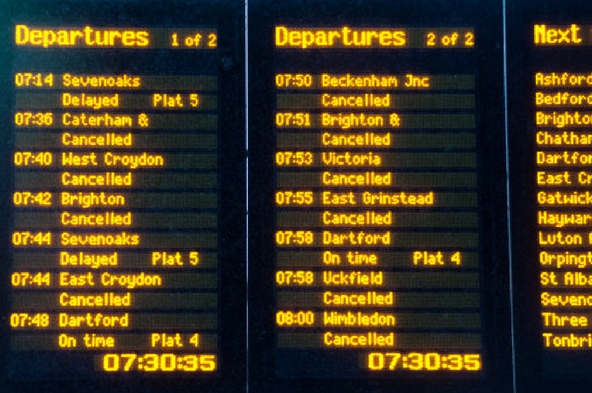 Rail passengers suffer the equivalent of fifty-four million hours in wasted time a year due to train company infrastructure failures. So says the RMT's raving Mick the Red Cash.

He is right according to the statistics, yet if one delves a little further, it amounts to delays of less than two minutes per train journey for most journeys. Perhaps this level of would not be acceptable to the Germans, Japanese or even the DUP - but if we didn't have the delays, what would the great British train travelling have to complain about - apart from the overcrowding that is.

Obviously there are major disruptions - not least those brought about by Mr Cash's guard strikes - which leave train travellers tired, frustrated and less fit for work but it is an exaggeration to say 6,154 years are lost to the British economy.

The stats being used by Cash (at the RMT's AGM in Exeter on the morning of June 28) come from the 2015-2016 ORR/Network delay attribution data.

The figure is calculated by determining the average delay per service nationally and attributing that delay to each passenger journey. It does not differentiate between peak and off-peak journey times or working days and weekend days. The time at which a delay occurs would obviously impact on different numbers of passengers.

Cash is (also) correct on another matter as passengers brace themselves for an announcement on August 15 of fare rises. This is the when the Retail Price Inflation fare increases for 2018 are announced and all forecasts predict an increasing trend to around 4 per cent. Cash said (again at the AGM): “In a few weeks passengers will be told that their fares are to go up in the region of 4% to fund investment. The reality is a network starved of the necessary investment leading to a scale back of essential rail maintenance and renewals resulting in massive delays for passengers and an impact on economy as a whole.”

As reported last week, the RMT has confirmed a further three days of strike action on Arriva Rail North in the guards versus driver only operated trains dispute and a coinciding one day strike in the South. They will go ahead on Saturday 8, Sunday 9 and Monday July 10. July 10 being the coinciding day.

The AGM in Exeter also saw the RMT  pointing to the East Coast line and Stagecoach reporting an £84 million 'black hole' in their accounts released on the same morning fuelling fears the franchise could be re-nationalised for a third time before being let out to another bidder.

Picture: Do the calculation - cancellations are a huge bugbear but two minute delays are not the worst thing to happen to the great train travelling public