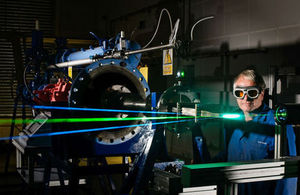 Jobs vacancies in high level STEM occupations (those requiring science, technology, engineering and maths) are almost twice as likely to be left unfilled due to a lack of staff with the right skills, new research shows.

The findings, released by the UK Commission for Employment and Skills (UKCES), show that 43% of vacancies in STEM roles are hard to fill due to a shortage of applicants with the required skills; almost double the UK average of 24%.

The report – Reviewing the Requirement for Higher Level STEM Skills – takes a close look at skills’ challenges facing STEM occupations and finds that these skills are of key importance to the performance of the UK economy in terms of jobs, productivity, innovation and competitiveness. Using the broadest definition, 5 million people are employed in high level STEM roles.

As part of the report, UKCES research has been used to map STEM occupations in according to anticipated need, creating a list of roles expected to be in highest demand up to 2022. In terms of current shortages vacancies for engineering professionals are worst affected with almost 60% of vacancies difficult to fill due to a lack of skills.

“These findings highlight an alarming shortage of skills affecting key jobs in the UK economy and point to a vital need to improve the level of training provision offered to those working within STEM industries,” stated Lesley Giles, Deputy Director, UKCES. “STEM skills underpin many of the industries at the forefront of our economy, from world leading engineering to cutting edge information technology, yet our findings also show some evidence that those working in high level STEM roles are less likely than most to receive training.”

Ms Giles went on to argue that there was a “vital need” for employers to act now to secure a steady flow of talent with the right skills in years to come and that building more structured training and development schemes as well as developing clear career pathways were just two ways in which early action could avert future crises.

The research also brings to light the range of sectors dependent on STEM skills with almost half (46%) of graduates working in ‘innovative’ firms in manufacturing and knowledge-intensive business service industries having a degree in a STEM subject.

Picture:    Jobs vacancies in high level STEM occupations are almost twice as likely to be left unfilled due to lack of skills.

The British Plastics Federation’s Education & Skills Committee has issued its Skills & Education Report highlights the skills and training needs within its...

ISS Facility Services has launched I can at ISS, said to be a fully integrated programme that has received the full backing by the BIFM and which can be used by all...