Stop Letting the Guard Down 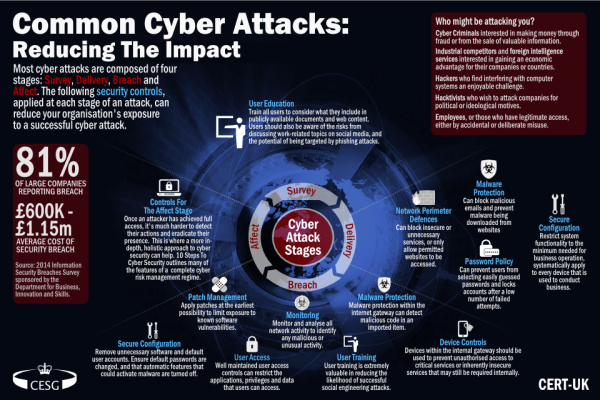 The government is urging UK businesses to protect themselves from cyber criminals following government research showing two-thirds of them suffer from cyber breaches or attacks in the past year.

Government research into cyber security also revealed that in some cases the cost of cyber breaches and attacks to business reached millions but the most common attacks detected involved viruses, spyware or malware that could have been prevented using the its Cyber Essentials scheme which is free to download.

The Cyber Security Breaches Survey found that while 25% of large firms experiencing a breach did so at least once a month, only 50% of all firms have taken any recommended actions to identify and address vulnerabilities. Even fewer, about a third of all firms, had formal written cyber security policies and only 10% had an incident management plan in place.

Results from the survey have been released alongside the government’s Cyber Governance Health Check which was launched following the TalkTalk cyber attack. It found almost half of the top FTSE 350 businesses regarded cyber attacks as the biggest threat to their business when compared with other key risks, up from 29% in 2014.

only a third of the UK’s top 350 businesses understood the threat of a cyber attack; only 20% of businesses have a clear view of the dangers of sharing information with third parties but many are getting better at managing cyber risks with almost two-thirds now setting out their approach to cyber security in their annual report.

“Too many firms are losing money, data and consumer confidence with the vast number of cyber attacks,” observed Ed Vaizey, Minister for the Digital Economy. “It’s absolutely crucial businesses are secure and can protect data. As a minimum companies should take action by adopting the Cyber Essentials scheme which will help them protect themselves.”

Picture: Cyber attacks are still not being defended against enough by many businesses argues the government

Rise of the Cybermen - IS Can mount an Attack from Anywhere

The conventional images of Islamic State have tended to be of atrocities and destruction but cyber-hacking now appears to be another weapon it's supporters are...