Stop Sending Me Those Damn Emails 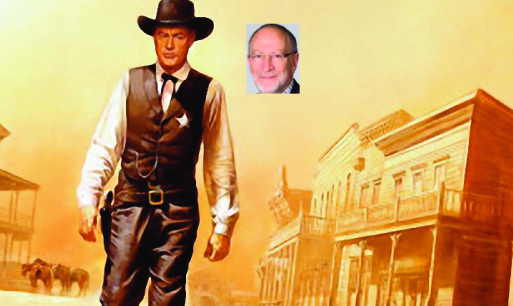 According to Sir Cary Cooper (as opposed to the High Noon actor Gary Cooper who has no relevance to this story other than to provide a clickbait picture and who might have said - if they'd been around in his simpler era - 'Stop Sending Me Those Damn Emails') computers, laptops, tablets and email enabled smartphones make it easier for workers to receive work email but this has become an 'epidemic' that stifles productivity, causes stress and is damaging to the work/life balance.

At this week's British Psychological Society's annual conference Professor Sir Cary said a compulsion to deal with the messages had caused the UK's employees to become less productive than many of their international counterparts and that people to be working at night, weekends and holiday on emails is not good for the health of our country."

Cooper, who is known for writing both books and papers on the subject of the workplace and productivity, also believes banning internal emails and returning to face to face meetings or telephone conversations will bring productivity up and stress down.

Cooper denies he advocates shutting down email servers at night - but considers it an option. He does think that employers are able to track when an employees is working when not paid to do so and should take the lead in encouraging them to relax and enjoy family time. "Every organisation has to come to a conclusion as to what is a good way to be operating, and the best way to do that is by asking the employees themselves how do we stop this epidemic of us being linked all the time to our emails."

Sir Cary is said to be planning more research into the relationship between email use and work performance but is against using social media (which some companies are utilising to overcome the drafting or receiving of long emails and the habit of copying all and sundry in) as he believes this is just the same problem in a different guise.

Cary L. Cooper is Distinguished Professor of Organisational Psychology and Health. He is the author/editor of over 160 books (on occupational stress, women at work and industrial and organisational psychology), and over 100 chapters in books. He has written over 400 scholarly articles for academic journals, and is a frequent contributor to national newspapers, TV and radio. He is currently Founding Editor of the Journal of Organizational Behavior, former Editor-in-Chief of the medical journal Stress & Health and Co-editor of the Journal of Organizational Effectiveness. He is a Fellow of the British Psychological Society, The Royal Society of Arts, The Royal Society of Medicine, The Royal Society of Public Health, The British Academy of Management and an Academician of the Academy of Social Sciences. Professor Cooper is past President of the British Academy of Management, is a Companion of the Chartered Management Institute and one of the first UK based Fellows of the (American) Academy of Management (having also won the 1998 Distinguished Service Award for his contribution to management science from the Academy of Management).

Picture: Professor Sir Cary Cooper, inset, is a major force in research and writing on people and organisational behaviour.

A new report from Staples has discovered that office workers in UK are suffering from 'Vocation Frustration', with 97% of employees feeling stifled in their work...