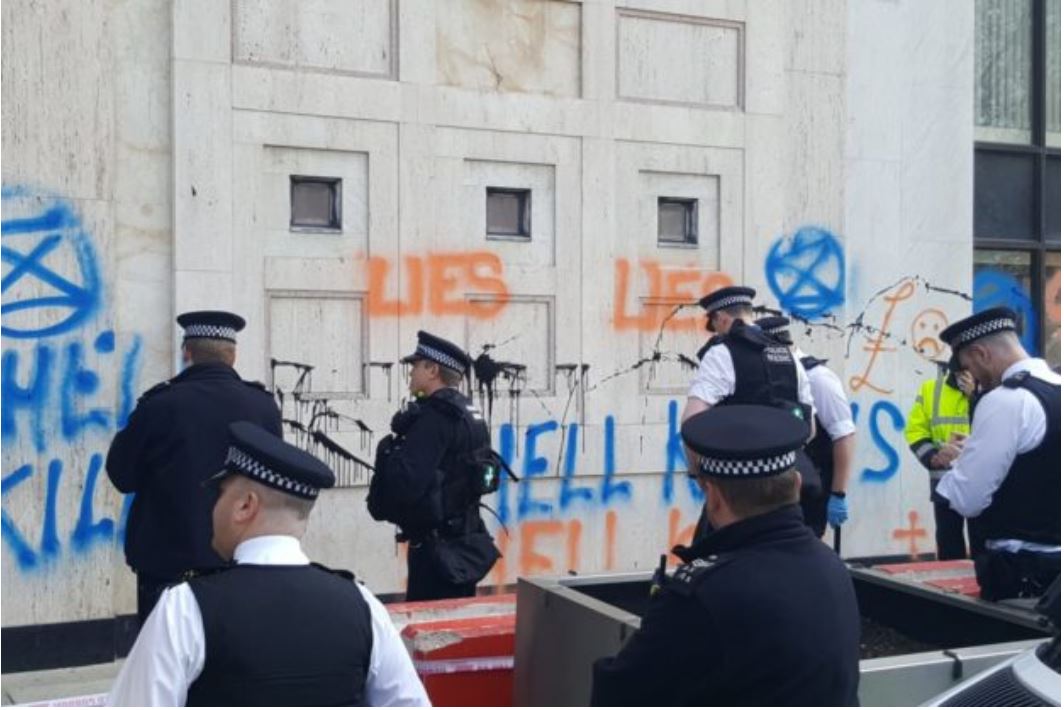 With thousands of people taking to the streets of London to block high-profile locations across the capital, Extinction Rebellion activists have escalated the campaign to include arrestable disorder.

Around nine activists decided to accuse Shell of ecocide and daub its premises with paint and graffiti.

According to the highly motivated and organised environmental movement  which arranges warm-up events and training prior to its demos, ecocide describes 'human activities that cause extensive damage to, destruction of or loss of ecosystems and which diminish the health and well-being of species within these ecosystems including humans'.

Glued to the windows

Multiple activists glued themselves on to the windows and blocked the doors of the Shell building in support of Stop the Ecocide campaign. A mob also smashed the glass of the revolving doors, with others climbing a scaffolding at the premises. A banner was attached to the scaffolding reading ‘Shell Knows’. Marchers carried banners that said ‘Fossil fuels are killing us – zero carbon now’, plus placards with Shell logos demanding the company 'Tell the Truth'.

The activists also spray painted walls with the word ‘Lies’.

By intentionally causing more than £6,000 worth of damage, the activists aim to get the case into the Crown Court to put their case to a jury rather than have the case heard in a Magistrate’s court where judges sit alone.

The Extinction Rebellion London blockade, either by plan or coincidence, will take part in the same week an 'Urgent' documentary by Sir David Attenborough will again show what climate change is doing, whilst warning that the world is at the last point in time that it can realistically make the changes that will allow climate destruction to be reversed.

An Extinction Rebellion spokesperson told ThisWeekinFM: "Shell has spent millions of pounds lobbying against action and has actively undermined renewable targets that could steer us away from the worst effects of ecological breakdown."

Another activists stated: “Climate negotiations have failed to prevent the escalating harm. You can’t negotiate with hurricanes, or melting ice caps. A criminal law against ecocide would impose a legal duty on governments to protect the planet’s biosphere.  Realistically, it’s the only reliable way to force industry and society to change direction.

“The only way to realise this in the limited window we have left for effective adaptation is to take high-profile non-violent direct action to catapult the issue into the public arena and put pressure on both government and industry.”

Simon Bramwell, the ex-builder and co-founder of Extinction Rebellion told an audience: “Our laws need to prioritise nature, unfortunately our government is handling this crisis worse than its dealing with brexit… we need to change the law and send a clear signal to Shell that business as usual can no longer mean destroying lives or trashing the planet."

In something of a contradictory statement, Bramwell also claimed: "Extinction Rebellion engages in peaceful, non-violent, civil disobedience to draw attention to the most pressing issue of our time. Intentional arrests for criminal damage allow us to take this issue into the courts.

"When witnesses take the stand they promise to “tell the truth, the whole truth and nothing but the truth”. Extinction Rebellion takes that oath extremely seriously. Trials that result from acts of criminal damage provide an opportunity to tell the courts that without an urgent and radical change of course, the consequences for humanity and life on earth are likely to be catastrophic."

Picture: Extinction Rebellion activists have escalated their environmental campaign to include an attack on a Shell building in London.