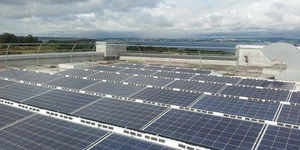 The solar industry is expecting the 'heatwave' to help businesses and organisations decide on the opportunities they could have with the first Solar Independence Day, starting on Friday, 3 July.

Commercial solar rooftops and solar farms across the country, along with domestic properties, are to open their doors tomorrow and Saturday as part of the event.

Analysis from the Solar Trade Association (STA) is predicting that at 2pm on Friday, solar will be supplying 15% of UK power demand.

MPs around the country will also be visiting solar sites in their constituencies, including Energy Minister, Andrea Leadsom MP, who will be visiting a local solar powered leisure centre in Brackley, Northamptonshire.

Locations opening their doors to the public on the day include a housing estate in Northumberland, a stately home in Aberdeenshire, a community solar farm in Hampshire and a waste facility in Berkshire, in a bid to raise awareness of the technology’s potential.

It is estimated that the UK now has almost 8GW of solar PV, across homes, offices, schools, warehouses and in solar farms. This is enough to power the equivalent of 2.4million homes securing 30,000 jobs in the sector and its supply chain. There are currently 660,000 solar homes, 30,000 solar schools, leisure centres and small commercial rooftops although there are only 1,300 large solar rooftops.

The theme of the event follows the STA’s publication just a few weeks ago of its Solar Independence Plan for Britain which sets out how the government could double the amount of solar and make it as cheap as fossil fuel electricity by 2020, all for a ‘modest’ amount of extra funds. The two days are being supported by the Climate Coalition, an alliance of leading campaign groups

“It is great to see so many solar homeowners and businesses get involved in Solar Independence Day, showing how solar really gives power back to the people, allowing households and business to generate their own clean, green electricity,” said Paul Barwell, CEO, STA. “At more than 80% public support, solar has been shown in government opinion polls to be the country’s most popular form of energy.”

Picture: For Solar Independence Day, iPower Energy is inviting anyone who is interested to come and visit the solar rooftop on Edinburgh College's Granton campus to find out about commercial solar rooftops.