Surge in Drug Driving in the UK Goes Unnoticed 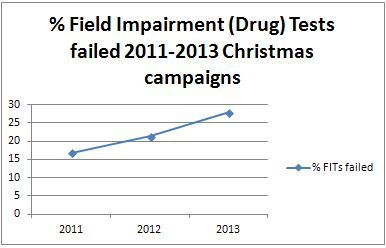 According to the latest research, there has been a 75% increase in driving under the influence of drugs in just two years.

Driving whilst under the influence of drugs has shot up in the UK, according to data released by ACPO, the Association of Police Chief Officers. Heralding an 8% drop in alcohol-related arrests from the annual Christmas Drink and Drug Driving campaign, few news reports picked up that more than 1 in 4 drivers were arrested after they failed a Field Impairment Test (FIT), the method police currently use to assess whether a driver is under the influence of drugs.

This is a significant increase over previous years: 28% of drivers failed the FIT assessment during December 2013, in comparison to 21% over the same period in 2012, a rise of nearly a third. In 2011 the figure was 16.85%, so that in two years the proportion of drivers failing the FIT has risen 75%.

Police carried out 513 FITs, arresting 143 people, almost double the 77 arrests in the equivalent period the year before, when 360 FITs were carried out.

In comparison, 3.4% of drivers failed a breath alcohol test, nine times less than the proportion of positive drug-driving FIT assessments.

“Most reports focussed on drink driving but ignored this surge in driving under the influence of drugs.” Say s Matt Taylor of ScreenSafe, a provider of drug and alcohol testing services. “We need to be cautious in that these figures are based on a small population of just 500 tests, as the police have to rely on a judgmental assessment and are not yet allowed to use the equipment other countries employ to test drivers by the roadside. Nevertheless the results are a significant increase in drug-driving tests and arrests in just one year. It reflects what many safety organisations have been saying over the last few years, that the message about the risks of drug-driving is just not getting through.

“Next December’s Christmas drug-driving campaign by the police may look very different, if they have the use of instant roadside drug testing equipment. There could many thousands more tests being carried out and then we will have a far more accurate picture to the  extent of risk people are taking if they have drugs in their system whilst driving.

Last year ScreenSafe joined up with the Road Haulage Association (RHA) to introduce SmartTest and encourage haulage operators and fleet managers to prepare for the new laws in drug driving being implemented this year and the introduction of roadside drug testing devices which will lead to a significant rise in drug-driving testing.

The Future Of The Company Car

On The Road to Heaven...Or Hell - Best Services Revealed

Norton Canes (Roadchef) services on the M6 toll has been rated England’s best motorway services in a user survey by the independent transport user watchdog. For...