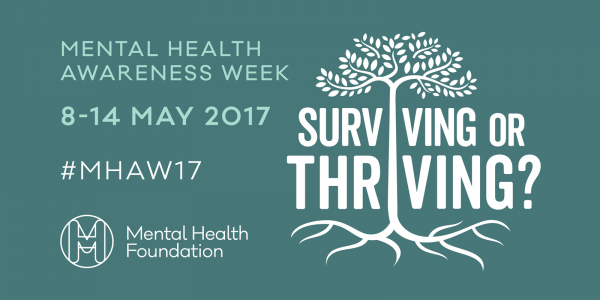 The organisation leading Mental Health Week, the Mental Health Foundation, has conducted a survey to understand the prevalence of self-reported mental health problems, levels of positive and negative mental health in the population, and the actions people take to deal with the stressors in their lives.

In March 2017, commissioned by the Mental Health Foundation, NatCen conducted a survey of 2,290 people. Only a small minority of people (13%) report living with high levels of good mental health.

People over the age of 55 reported experiencing better mental health than average. People aged 55 and above are the most likely to take positive steps to help themselves deal better with everyday life - including spending time with friends and family, going for a walk, spending more time on interests, getting enough sleep, eating healthily and learning new things.

The great majority (85%) of people out of work have experienced a mental health problem compared to two thirds of people in work and just over half of people who have retired.

Nearly two-thirds of people say that they have experienced a mental health problem. This rises to 7 in every 10 women, young adults aged 18-34 and people living alone.

Mark Rowland from the Mental Health Foundation said: "Current levels of good mental health are disturbingly low. The barometer of success of any nation is the health and wellbeing of its people. We have a long way to go before we can say that we are a thriving nation. Although we have made great strides in the health of our bodies and our life expectancy, we now need to achieve the same for the good health of our minds.

"The survey suggests that our collective mental health is deteriorating. Overall most of us report experiencing a mental health problem in our lifetime. However, young adults report this at a higher level, despite having had fewer years in their lives to experience this. While there may be an element which reflects a greater ease at acknowledging a mental health problem, nevertheless this suggests a real and emerging problem. It is possible that it is linked to greater insecurities in life expectations for work, relationships and homes. The reasons and solutions warrant investigation.

"The figures show that the experience of poor mental health, while touching every age and demographic, is not evenly distributed. If you are female, a young adult, on low income, living alone or in a large household, your risks of facing mental ill health are higher.

"We all have mental health. Good mental health is an asset that helps us to thrive. This is not just the absence of a mental health problem but having the ability to think, feel and act in a way that allows us to enjoy life and deal with the challenges it presents. Yet it can be easy to assume that ongoing stress is the price we have to pay to keep our lives on track. It is time to challenge that assumption."

As Mental Health Awareness Week was approaching, Mark Rowland from the Mental Health Foundation about the theme for the week, Surviving or Thriving? Listen Here

Rowland discusses what is meant by surviving and thriving, what the difference is and what scenarios suggest someone could be surviving or thriving.

Not too late to get involved via Social Media

It may be too late for most organisations to get involved in Mental Health Awareness Week if they haven't made the commitment already, however, one good way of supporting the cause would be to persuade staff to take part in the Mental Health Foundation's Survey. Click here

Another way would be to Tweet this story and share on other social media platforms - use the buttons below.

Did I Wake You Pet?

Fiona Bowman is a successful senior facilities manager. On October 31 she will become a published author when her first book, Did I Wake You Pet? is released by Austin...