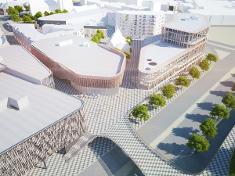 Major investment in digital infrastructure is at the heart of the Swansea Bay City Region's 'Internet Coast' bid to the UK Government for a City Deal that could be worth billions of pounds to the regional economy over the next 20 years.

As well as boosting the regional energy, health and social care sectors, a green light from Westminster for the bid could also lead to the kind of digital infrastructure on Kingsway that would attract tech-hub businesses, generating thousands of jobs by encouraging innovation, entrepreneurship and enterprise

Cllr Rob Stewart, Swansea Council Leader, said: "Internal works at the former Oceana building have now been finished. With demolition due to be finished in March, a new office development will then, subject to funding, be constructed on site as we go about transforming Kingsway into an employment district that will generate thousands of jobs for local people.

"We've also acquired a number of other buildings in the Kingsway and Lower Oxford Street areas over recent months as we look to either refurbish or replace them with new developments, while improving Kingsway's look and feel as well.

"But alongside major employers, a UK Government approval for our City Deal bid would also lead to a digital district on Kingsway that would accommodate tech businesses to ensure innovative, start-up businesses could flourish and expand.

"These plans would generate more footfall and spending in the city centre, open up jobs for local people and help retain some of the city's brightest entrepreneurial talents from our universities."

The canopy outside Oceana was demolished by Cuddy Group on November 27, allowing scaffolding to go up in readiness for the start of major external demolition works in January.