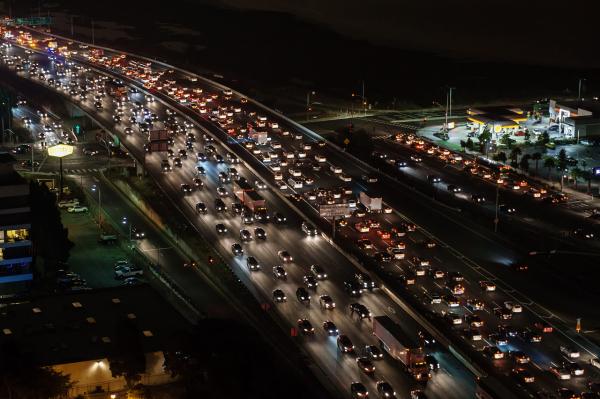 The number of employees with daily commutes of two hours or more has shot up by nearly a third (31%) over the past five years, according to new analysis published by the TUC.

Women have experienced the biggest rise in long commuting.

Men still account for the majority (61%) of those who make work journeys of two hours or more. However, women (+35%) have experienced a sharper rise in long commuting since 2010 than men (+29%).

The TUC says the growth in long commutes in sectors like education (+46%) and health and social care (+26%), where high numbers of women work, may explain this rise.

Health and social workers (376,000), public administration and defence workers (320,000) and retail and wholesale workers (315,000) are the biggest groups commuting for two hours or more.

Finance and insurance staff (29.3%) are most likely to commute for two hours or more, followed by Mining and quarrying workers (28.9%) and information and communication workers (25.5%).

Workers in Northern Ireland (+57%) have experienced the biggest rise in long commuting, followed by the South East (+37%) and the West Midlands (+27%).

By contrast, commute times for those using buses (-1 minute) and the London underground (-5 minutes) have fallen.

The TUC believes the increase in travelling times may be explained by stagnant wages combined with soaring rents and high house prices leaving many workers unable to move to areas closer to their jobs; the lack of investment in roads and railways increasing journey times.

TUC General Secretary Frances O’Grady said: “None of us like spending ages getting to and from work. Long commutes eat into our family time and can be bad for our working lives too.

“Employers cannot turn a blind eye to this problem. More home and flexible-working would allow people to cut their commutes and save money."

“Not only is the amount of time commuting an issue, the 9 to 5 culture with its peak travel times generates congestion on railways, underground and road networks and as a consequence, increases stress for commuters.

“Clearly the government, public transport providers and employers must do more in order to address the major negative impact on the UK’s economy and lost productivity.”

Could Cutting Your Commute Help Tackle the Climate Emergency?

Research suggests that reducing your commute by just one day per week could save 379.2kg of CO2 emissions. This amount of carbon is equivalent to 2,433km on a...

Over 1,500 Key Workers Took up Europcar Rentals During Lockdown

Critical workers such as NHS, fire and police staff, teachers, carers and volunteer responders rented vehicles during the height of Britain’s lockdown. Europcar...

49 Per Cent of Commuters Plan to use Their Own Vehicle, as Travel Habits Shift

COVID-19 will revolutionise the way we commute, stemming from a lack of confidence in public transport, says Addison Lee. Research shows that 6 out of 10 London...

Travelling To Work In A Pandemic

Following the relaxation of lockdown rules and as we prepare to move to phase two, many who cannot work from home are returning to the commute. As schools, outdoor...