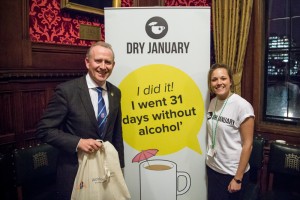 A new Public Health England (PHE) campaign is encouraging drinkers to take a break and have a Dry January.

The reasons behind this latest drive are stark:

People are being encouraged to take a break from alcohol and to consider having a Dry January this New Year to reset their drinking habits.

Research carried out earlier in 2015 showed 67% of participants had sustained reduced levels of drinking six months after completing Dry January.

“The festive period often sees people drinking much more than usual which as well as being damaging to our health also sees the NHS and police dealing with more drinking-related accidents and emergencies,” stated Dr Yvonne Doyle, London Regional Director, PHE. “A period of abstinence could help encourage less harmful, better drinking habits in the long term, even 6 months later. Evidence from Dry January shows that more than two thirds of participants are still drinking less.”

Other benefits mentioned by the charity, Alcohol Concern, include the opportunity to give the ‘body a break’, along with lower blood sugar and blood pressure, improved sleep, losing weight and feeling more ‘energised’ as well as saving money.

Picture:    Graham Evans MP at the start of the campaign for Dry January