Teresa May - Attack in the UK is Highly Likely 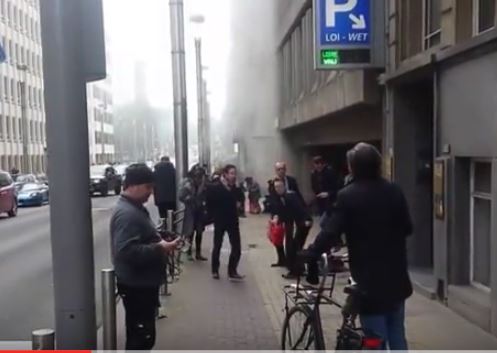 In what was the third time in her career she has stood before the Commons following a terrorist attack on the soil of a British ally, Teresa May said the UK stays on a 'severe' status, meaning an attack in the UK is highly likely.

"The cold blooded attacks in Brussels yesterday saw 34 dead and over 200 wounded. Four British people are among wounded and one is missing and we are providing consular assistance to those affected. We offer our thoughts and prayers to all victims

"Daesh has taken responsibility for the attacks on tourists, workers and travellers and Belgium has increased its threat level to four 'serious and imminent'. The UK will provide support for our friend and ally as we did last year following the attacks in Paris.

"There have been 14 attacks in Europe since 2015 and we've seen atrocities in Bangladesh, Saudi Arabia, Tunisia...and more recently Istanbul in Turkey.

"The UK's threat status is at severe but I have to stress we have no specific intelligence on a forthcoming attack. Police have disrupted seven potentially serious attacks in the UK and Daesh has plans for attacks around the world.

"A COBRA meeting has seen an increase in officers at ports, more vehicle searches, more specialist search dog deployment and an increase in policing at transport hubs. The Metropolitan Police will be more visible on the London transport network. Not to specific intelligence."

Reports are now coming in of a bomb making factory in Brussels that shows the terrorist cell in the city had substantial resources of explosives, accelerants and shrapnel (nuts and bolts) and suggests that there still exists a substantial threat from a network operating in Belgium.

People will be arriving into work this morning to the news that two explosions have rocked Brussels. The main airport for the city was attacked shortly after 8:00am local time followed by Maalbeek Metro Station. (The stations before and after Maalbeek also reported explosions but it is thought at this time that both the sound and smoke from the Maalbeek blast had travelled.)

Zaventem Airport saw two separate suicide bombings - one at the American Airlines check-in and one at a Starbucks.

The transport system in the city has been suspended - airports, trains, metro busses and trams.

A suspect in the Paris attacks of last year, Salah Abdeslam (aka Abdul Salam), was arrested last week with the Belgium Prime Minister saying that the discovery of a cache of weapons could be a warning of an ability for his accomplices to carry-out further terror attacks.

Sarah Clarkson, a British national working in Brussels told the BBC Breakfast programme: "I am on the ninth floor of an office building in the EU quarter (Maelbeek where many EU institutions are based) close to Maalbeek Station. We heard no blast but we heard sirens. There always sirens but there was a noticeable increase. I can see fire engines and police vehicles arriving and at least six ambulances have already attended. The entire area has been cordoned off.  Our offices have been very quick with advice and everyone is staying calm."

Professor David Begg who works for Heathrow said on live television: "This is something that concerns the aviation industry - how to keep terminals safe landside. We have a tremendous record for eliminating the risk of someone taking a bomb on board an airplane but this is a weakness in the chain. At Heathrow our vigilance and the security arrangements are very strong but we will have to look at this very closely. What may come may mean more inconvenience but the government will have to look at the implications and no one will want to compromise safety."

Many international airports have recognised the vulnerability of their check-in areas - shared by other public venues - to a terrorist attack. Most have high visibility security arrangements but no formal mechanism for checking who is coming on site. However in Moscow and Belfast as two notable exceptions, check-ins have security points before anyone can enter.

A Cobra meeting will be convened this morning. The prime Minister has already sent his condolences.

The following text appears on YouTube to support the above video:

A blast has been reported at the Maalbeek metro station in Brussels, which is just meters away from the Gare de Bruxelles-Schuman railway station. The explosion comes less than an hour after a bombing at a Brussels airport killed at least 13 people.

Large amounts of smoke have been seen coming out of the metro station in the Belgian capital. Brussels’ transport authority says all metro stations in the city are being closed, Reuters reports.

The Maalbeek station (which is located in Maelbeek) is also near a number of important EU buildings such as Berlaymont building, which houses the EU Commission and the Council of the European Union.

Belgian authorities have raised the security alert to the highest level following blasts at the Zaventem Airport and Maelbeek Metro station.