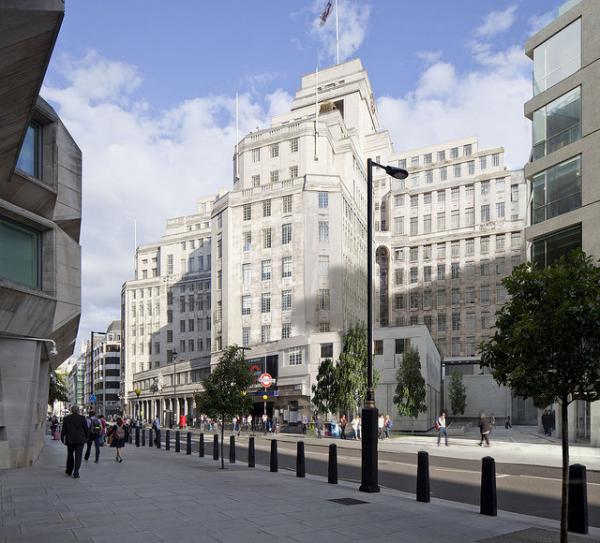 Transport for London has unveiled its plans for London Underground’s historic home - the Grade 1 listed 55 Broadway which is faced with 78,000 cubic feet of Portland stone - and carvings by Jacob Epstein, Eric Gill, Henry Moore, A H Garrard; Eric Automer; Allan Wyon; and F Rabinovitch. A the time of the building's conception, the contemporary artists of the time were invited to sculpt decorative features into the stone facade. The sculptors amazingly, all worked on site. Two of the end products are just above street level and a further eight are above the sixth floor windows on each side of all four wings.

The new development is planned to include a mix of 'affordable' (if you are very, very rich), 'social' (if you were once very, very rich) and private housing - for the very, very rich. 55 The Broadway, St James', sits within the boundaries of some of the most desirable real estate in London.

With a 5,700 acre property portfolio, TfL is the custodian of one of the largest and most valuable estates in London. Under the influence of Mayor Boris Johnson, the estate is to be developed in order to contribute back to London Underground's costs. Steps are being taken to use the five parts of TfL’s commercial estate - stations, property, advertising, sponsorship and retail.

Early next year, TfL will be launching a process to identify a mix of private sector development partners, with whom it will be working with over the next decade to extract £3.5billion from its portfolio. The property will be earmarked for housing, office space and retail.

An exhibition on the proposals for the redevelopment of 55 Broadway is open to the public from Tuesday 16 September to Friday 19 September from 11:30-19:00 in retail units14-17 inside St James’s Park station.

Recognising 55 The Broadway's architectural significance, TfL is now leading the work to prepare a planning application for submission next month. Throughout the process TfL has engaged English Heritage to ensure the proposals preserve the building’s iconic status.

Graeme Craig, Director of Commercial Development at TfL, said: “Our aim is to make life in London better and help keep the city working and growing. This means recognising our role as the custodian of one of London’s largest and most valuable property portfolios and developing our assets for the benefit of the city."

Andrew Tate, Director of TateHindle, the architect firm who has prepared the planning proposals said: “We were excited to have the opportunity of working on Holden’s visionary building. The most important interventions happen at ground level and will re-establish Holden’s direct route from Victoria Street through to the St James’s Park ticket hall, with a resulting increase in amount and quality of the retail space. Removing the 1970s Petty France building will provide a new entrance court creating a natural separation of the residential from the station and retail elements.

“Public realm improvements will greatly enhance the setting of the Grade I listed building, wider, more generous stone paving and swapping the glass from opaque to clear will transform and open up the retail. The restoring of 55 Broadway’s striking footprint will also allow views of two of the ‘Winds’ series of sculptures, that help make the building so memorable.”

The building, designed by Charles Holden between 1927 and 1929, was constructed as a new headquarters for the Underground Electric Railways Company of London (UERL), the main forerunner of London Underground.