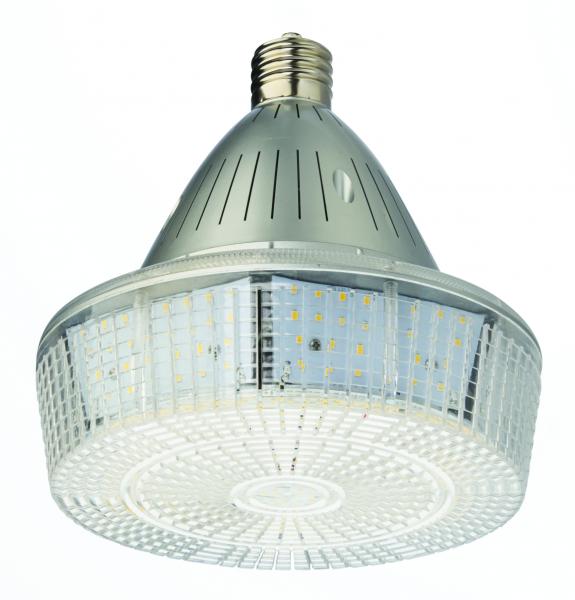 With rising demand, the cost of LEDs and fittings is gradually falling, writes Michael Morrison. However, if installing complete fittings is required it can still be prohibitive for FM and estates professionals seeking to cost-justify sweeping upgrades from legacy high intensity discharge (HID) lamps to LED.

This is where LED HID retrofit lamps can offer an alternative, more economical and non-invasive solution by virtue of retaining the existing light fittings and fixtures. One or two manufacturers are now able to address the most typical HID re-lamping applications, replacing 50 – 1000 Watt lamping applications with fully CE/ROHS tested LED retrofit solutions, from low bays and high bays for factory, warehouse, retail mall, hotel and office spaces, to post tops, bollards and wall packs for exterior floodlighting and walkways.

Apart from the energy savings, after the initial payback period (normally between 12 to 15 months) the LED retrofit lamps can be easily and cost-effectively replaced with a more efficient version of the same lamp. For example there are lamps that were 150 Watt producing 12,000 lumens 18 months ago, and now that same lamp runs at 140 Watts and offers 16,000 lumens thanks to the improvements in LED efficacy. Light Efficient Design has also recently introduced the first range of 35 and 55 Watt SOX bayonet cap retrofits for replacing these increasingly hard to find and expensive lamps.

While such advancements by a few quality manufacturers are undoubtedly bringing the LED retrofit approach into the mainstream, there still remain spurious claims from importers over the lumen output and lifetime of their products, which have neither been officially tested nor certified. Tougher EU legislation and certifications are gradually squeezing out these imposters but they have been allowed to create uncertainty over the reliability, light quality and overall suitability of retrofit for serious commercial and industrial LED applications.

It is therefore strongly recommended that FM professionals sourcing these types of products ensure data is based on external testing by accredited laboratories, carried out in accordance with the LM79 and LM80 standards. Also it is highly advisable to check the correct thermal management of the LEDs and drivers in order to reach the 50,000 hour promised lifetime. Retrofits which integrate long life fans specially developed for cooling LEDs will therefore be a prerequisite for many applications.

Condensation, dust, chemicals and shock can all adversely affect long term reliability and light quality. To address this, a handful of LED retrofit manufacturers are now applying new production techniques to further enhance the performance of their solutions. The use of a conformal coating, for example, to electrically insulate the circuit from environment stresses. Furthermore the anti-corrosive properties of the polymer will extend circuit life.

A further potential reliability issue is in installations where the ballast has not been bypassed. While there are products on the market which negate this, it is recommended to always bypass or remove the ballast, as using control gear adds wasted wattage. Old control gear can always fail and it is almost impossible to know how long the control gear has been in operation, so it must be viewed as unreliable.

The LED retrofit installation is simple enough. Having assessed the wattage of the lamp to be replaced and selecting the appropriate LED lamp, remove the existing lamp, bypass the ballast and then connect the new LED retrofit lamp. The process should take about the same time as a typical HID re-lamping.

What to look for:

Aqualuma has announced that all models of its high performance low energy LED highbay range will be covered by a seven year worldwide warranty. This company states the...

Préfontaine is a metro station on the Green Line of the Montreal Metro rapid transit system operated by the. Société de transport de Montreal...

Lighting up the Performance Standard

The UK specialist lighting manufacturer believes it is setting the standard for quality and price performance with a range of LED tube lights for fluorescent retrofit...

Trilux has launched its New Light 2013 catalogue which features over 1,000 pages of indoor and outdoor lighting options. It provides detailed product information that...