The Jackson Hive and a New Terror Campaign 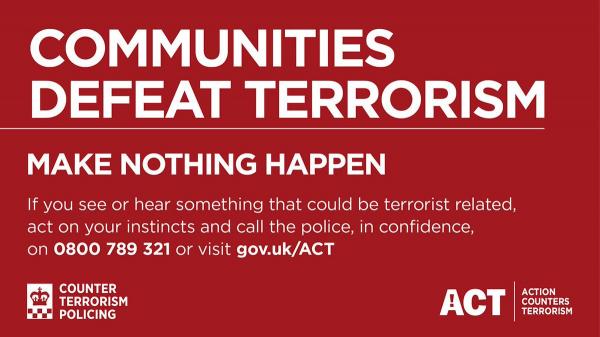 A new national police campaign is again asking the public to act on their instincts to help tackle terrorism.

It comes as the country's threat level still stands at 'Severe' (meaning an attack is highly likely) and the UK’s most senior counter terrorism officer, Assistant Commissioner Mark Rowley, says 13 serious terrorist attacks have been foiled since 2013.

Meanwhile, the Henry Jackson Society reports there have been 264 convictions for Islamism-inspired terrorism offences as a result of arrests from 1998 onwards involving 253 British or foreign nationals.

At the launch of a new engagement campaign (week ending March 10), Commissioner Rowley praised the public contribution thus far but warned the terrorist threat is becoming increasingly complex and varied

The appeal comes as new figures reveal that information from the public has assisted counter terrorism police in a third of the most ‘high-risk’ investigations.

The Action Counters Terrorism or ACT campaign launched on Monday March 6. It will continue to urge the public to report suspicious activity to the police.

Commissioner Rowley told an audience of community and business representatives in Manchester that information from the public continues to help keep people safe by playing a significant part in recent successes in countering terrorism. However, officers need even more information to build better intelligence pictures on individuals or groups plotting attacks.

Rowley said: “It is very encouraging that in a third of cases involving our most serious terrorist suspects we have benefited from information from the public.  The number of calls and online reports we receive is increasing - but now we are appealing for even more."

“However, advances in technology make it more complex and challenging for us to spot would-be terrorists because it's easier for them to be in contact with others and be radicalised in a relatively short space of time.

“The threat is becoming more varied and the move towards low-tech attacks on crowded places, like those we have seen in major European cities and beyond, makes it even more important everyone remains vigilant and acts by calling us confidentially if they are concerned about suspicious activity.”

Security Minister Ben Wallace added: “The horror of recent terrorist attacks in Europe and beyond is a shocking reminder of the threat we all face.  We know that we are not immune as the threat to the UK is currently assessed as 'Severe', meaning an attack is highly likely."

A job for all

Wallace continued: “Ultimately, this is a job for all of us. I encourage people to follow the campaign’s message to remain alert but not alarmed by the threat and report any concerns to the police.”

Last year (April 2015 to March2016) the Anti-Terrorist Hotline, received more than twice the number of calls on the previous year with just over 22,000 people making contact. Officers hope the figures will continue to increase if more can be done to encourage people to call or report online.

Research to support the ACT campaign looked at public attitudes towards counter terrorism policing. Over 80 per cent of respondents said that it was important for communities to work with police to prevent terrorism. However, a quarter of those surveyed said they might not report their suspicions because of fears over wasting police time, and 39 per cent were unsure about what suspicious behaviour might look like.

Rowley concluded: “Our call and report numbers are increasing and research has shown many people want to play their part, but some  worry they might be wasting our time or they are not sure what sort of activity might be suspicious. So we want to allay those concerns and help them to help us.”