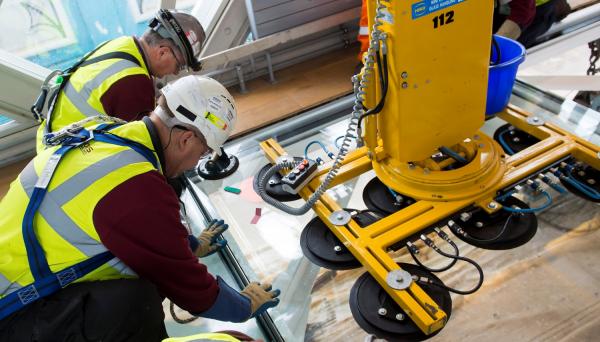 Having won the £250,000 contract to design and manufacture the (one-way) glass, which was been inserted into the floor of each of the two 11.5m long walkways on the Grade I listed building, Glassolutions found itself quickly brought back to repair damage to the surface.

The glass specification was developed to accommodate major external forces such as wind loading and the potential impact should a passing vessel strike the walkways. Equally important though was consideration of internal impacts on the glass floors and how to design-in a way to easily repair any damage that results from the heavy footfall of 600,000 plus visitors a year.

The option developed by Glassolutions was to incorporate a top ‘sacrificial’ layer of glass into the panels. This was demonstrated with a breakage in one of the panels occurring when a heavy item was accidentally dropped during the new venue’s opening fortnight. Glassolutions was able to respond immediately and replaced the sacrificial layer from stocked spare glass panes within 48 hours to help the venue get back to full operation quickly.

Pictured: The ‘sacrificial’ layer was quickly replaced by Glassolutions after unintended damage was done to it soon after the west walkway was opened at the end of last month

How Tough is the Toughened Glass?

Just weeks after its opening, the glass walkway on Tower Bridge has been damaged by a night time reveller. The damage to one of the six glass panels occurred on Friday...

As reported recently on ThisWeekinFM, Chicago is home to skyscrapers that take advantage of their position to entertain visitors at height (click here for previous...

Stopping the Embarrassing Pain in the Glass

The headaches caused by design of the so-called Walkie Scorchie building in the City of London, may well be over, according to the developer, Land Securities. It has made...