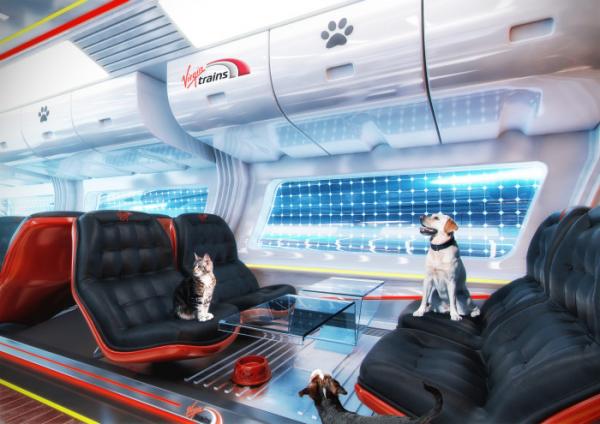 Six children from across the UK were selected as winners of a Virgin Trains competition to inspire future developments of the new Azuma train.

Private pet carriages and solar powered propulsion are amongst the inventive ideas that children have designed into their ultimate train of the future. Asked by Virgin Trains to imagine what trains would be like in decades to come, kids came up with personal pods, transparent walls and mini-golf compartments.

Now, the train operator is set to use some of these designs to inspire the development of its Azuma trains which are set to be a big hit travel on east coast lines. The Azuma will be one of the most advanced trains on the UK’s rail network. 65 trains will provide an extra 12,200 seats for a new and expanded timetable, the fleet of Azumas will increase capacity into King’s Cross by 28 per cent during peak time.

Virgin Trains called on the creative minds of youngsters, and selected six ideas from a raft of drawings and sketches sent in by children. From imagination to interpretation, the six ideas were then developed into full concept images, with the winning designs combining practicality with entertainment and visionary thinking with environmental considerations.

David Horne, Managing Director of Virgin Trains on the East Coast, said: “The Virgin Azuma is set to be the most state of the art train on the network when it arrives in 2018 so what better way to celebrate this than to work with our younger customers to find out what they would like to see on our exciting new trains. Their ideas have given us a refreshing outlook on what the future could hold and will help us towards our goal of revolutionising every element of our customers’ experiences.”

Picture: All aboard - what will the train of the future look like?