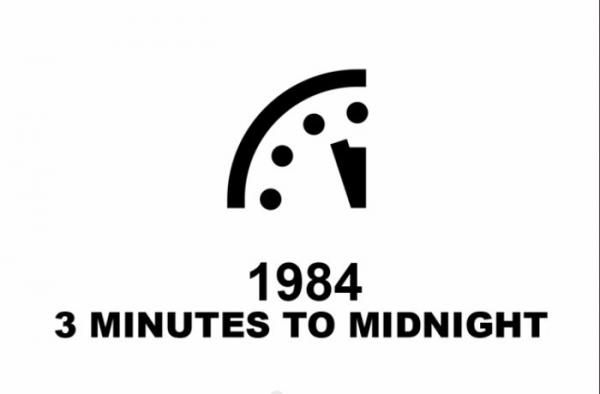 Set at an almost respectable five minutes to midnight as we came into 2015, The Doomsday Clock, a symbolic device created by the international organisation, the Bulletin of the Atomic Scientists has jumped a huge two minutes. The event took place on January 22 when doomsday was deemed as close as in 1984 when nuclear weapons were at their most proliferated and Ronald Regan was the world's most powerful man.

The Bulletin's science and security board, which adjusts the clock, said steps to address climate change do not match expectations of even five years ago. Executive Director Kennette Benedict said: "Unchecked climate change and nuclear arms race resulting from modernisation of huge arsenals pose extraordinary and undeniable threats to the continued existence of humanity." Benedict and colleagues said action to cap greenhouse gas emissions and undo nuclear weapons modernisation programmes were urgently needed.

Richard Somerville, a Bulletin scientist claimed: "2014 is the warmest year on record globally. Nine of the 10 warmest years on record have all occurred since 2000. The warming trend in recent decades is unmistakable. Human activity is the dominant cause of this warming. If global emissions of carbon dioxide and other heat trapping gases continue to rise, the severity of climate change impacts will inevitability increase."

Founded in 1945 by University of Chicago scientists who had helped develop the first atomic weapons in the Manhattan Project, the Bulletin of the Atomic Scientists created the Doomsday Clock two years later. The decision to move (or to leave in place) the minute hand of the Doomsday Clock is made every year by the Bulletin's Science and Security Board in consultation with its Board of Sponsors, which includes 17 Nobel laureates.

Below we have an edited version (with most of the nuclear weapons references removed in order to focus on the environmental concerns) of the documents circulated to world leaders on January 22.

Today, more than 25 years after the end of the Cold War, the members of the Bulletin of the Atomic Scientists Science and Security Board have looked closely at the world situation and found it highly threatening to humanity - so threatening that the hands of the Doomsday Clock must once again be set at three minutes to midnight, two minutes closer to catastrophe than in 2014.

Despite some modestly positive developments in the climate change arena in the past year, reflecting continued advancement of renewable energy technologies, current efforts are entirely insufficient to prevent a catastrophic warming of Earth. Absent a dramatic course correction, the countries of the world will have emitted enough carbon dioxide and other greenhouse gases by the end of this century to profoundly transform Earth's climate, harming millions upon millions of people and threatening many key ecological systems on which civilization relies.

At the same time, efforts to reduce world nuclear arsenals have stalled. The disarmament process has ground to a halt, with the United States and Russia embarking on massive programs to modernize their nuclear triads - thereby undermining existing nuclear weapons treaties - and other nuclear weapons holders joining in this expensive and extremely dangerous modernization craze.

We also implore the citizens of the world to demand action from their leaders. The threat looms over all of humanity. Humanity needs to respond now, while there is still time.

A climate catastrophe looms - but is not inevitable. According to US government environmental scientists, 2014 was the hottest year in 134 years of record keeping. Nine of the 10 warmest years on record have all occurred since 2000. This pattern is deeply disconcerting.

In November 2014, the Intergovernmental Panel on Climate Change (IPCC) released its Synthesis Report encapsulating the key findings of its just-completed multivolume assessment of climate change. The IPCC reported that global warming is unequivocal and unprecedented and already responsible for widespread damage. It warned that warming - if unchecked by urgent and concerted global efforts to greatly reduce greenhouse gas emissions - would reach 3 to 8 degrees Celsius (about 5.5 to 14.5 degrees Fahrenheit) by the end of the century.

This may seem like a modest rise in the average global temperature. After all, people at a given location often experience much greater temperature swings in the course of a single day. But that is a local variation, not a change in the average temperature of the surface of the entire planet. A similarly “modest” global average warming of 3 to 8 degrees Celsius brought Earth out of the frigid depths of the last ice age, utterly transforming the surface of the planet and in the process making it hospitable to the development of human civilization. To risk a further warming of this same magnitude is to risk the possibility of an equally profound transformation of Earth’s surface - only this time the planet’s hospitality to humanity can by no means be taken for granted.

US Secretary of State John Kerry spoke passionately of the threat at the recent United Nations Framework Convention on Climate Change negotiations in Lima, Peru. After reciting the year’s litany of weather-related disasters - record-breaking droughts, floods, and storms, mere portents of what can yet be expected - Kerry lamented that the world is “on a course leading to tragedy.”

It is no comfort that Kerry was merely echoing warnings from the 1992 Earth Summit. In the more than two decades since then, human society has shown alarmingly little commitment to curbing greenhouse gas emissions. While efforts to transition to low-emission sources of energy have yielded some encouraging results, the net effect has been far too small, when compared with the scientific requirements for addressing the climate challenge. Emissions rose much more quickly in the 2000-2010 period than in any of the preceding decades, while investments have poured into fossil fuel infrastructure at a rate ofmore than $1 trillion per year, complemented by additional hundreds of billions of dollars in fossil fuel subsidies.

Expectations for earnest action from our leaders have fallen so far that some observers are relieved to see even nominal attention paid to climate change. A recent joint announcement on climate goals between the United States and China is a case in point. Under the agreement, the United States would cut greenhouse gas emissions 26 to 28 percent from 2005 levels by the year 2025; this proposal was lauded as a “historic step” and a “game changer.” Few observers pointed out that the United States was actually back-tracking on a target presented by President Obama five years ago in Copenhagen, when he offered a 30 percent cut by 2025. And the Chinese side of the agreement was remarkable for its vagueness, offering to "peak" its carbon dioxide emissions by 2030, without saying what that peak would be.

The IPCC has made clear that a climate catastrophe is not inevitable. The world has technological and policy options available at entirely acceptable costs. Time is short, but it has not yet run out. Our leaders and our institutions of global cooperation and governance can yet rise to the challenge. But rise they must, and quickly.

As Secretary Kerry said in Lima, "whether we’re able to promptly and effectively address climate change is as big a test of global leadership, of the international order - such as we call it - it’s the biggest test of that that you’ll find.”

The Bulletin of the Atomic Scientists’ Science and Security Board has reset the hands of the inconic Doomsday Clock it created 70 years ago. We have moved on 30...