Through the Looking Glass and to Severe Lacerations 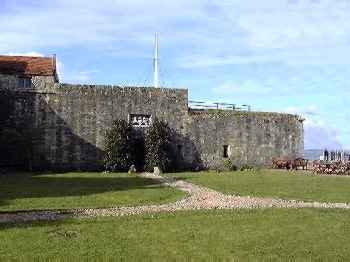 For the first time in its history, English Heritage has had to accept a Crown Censure issued by the Health & Safety Executive (HSE), equivalent to a criminal prosecution, for safety failings after a 12-year-old boy was badly cut when a glass floor panel broke during a family visit to Yarmouth castle on the Isle of Wight in September 2011.

The Crown Censure proceedings related to English Heritage’s discharge of its duties as an employer, under Section 3 of the Health and Safety at Work etc Act 1974.

The youth was with his big brother and two friends in the seventeenth century exhibition room when he jumped on a glass viewing panel set into the floor, designed to show stonework beneath. The panel, which had been in place for many years and walked on by thousands of people over that time, splintered into shards and the boy suffered severe lacerations to his left leg from the jagged glass. He needed surgery twice but is now recovered and back at school.

HSE found the glass floor panel broke because it was not made of toughened or laminated glass. English Heritage had not assessed specifically the risk of glass floor panels breaking at any of its properties since it was created as a body in 1984 and given responsibility for around 400 historical sites, although there had been regular visual inspections of the glass panels which would have identified any obvious damage.

After the incident, English Heritage took immediate action to cover all similar glass floor panels whose strength could not be determined easily, or cordoned off the panel area, and used warning signs to alert the public. It also identified and recorded the location of glass floor panels and low-level glass wall panels in all its properties and ensured they were safe.

Stephen Williams, the Head of Southern Division for HSE, who chaired the Crown Censure meeting, said: “Our investigation into the details of this young boy’s injuries at Yarmouth Castle found that the failings by the English Heritage were serious enough to warrant this course of action, and, in other circumstances, prosecution.

“The evidence brought to light by the HSE investigation would be sufficient to provide a realistic prospect of conviction of English Heritage in criminal courts. This Crown Censure is the maximum enforcement action that HSE can take and should serve to illustrate how seriously we take the failings we identified.”

Get Gladder with a New Ladder

Beginning on 1 September and run by the Ladder Association, the Ladder Exchange takes old, potentially dangerous ladders out of circulation by offering people a cash...