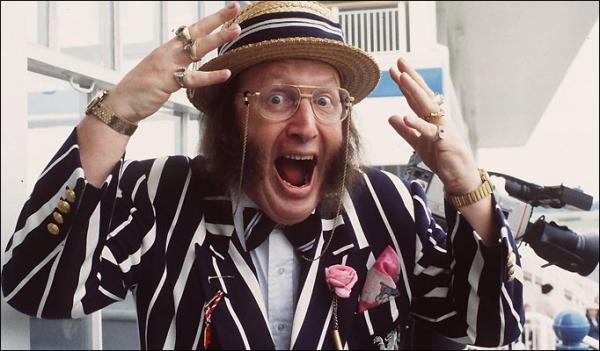 John McCririck, the well known Channel 4 Racing pundit famous for endlessly waving his hands to camera to perform his trademark (or one trick pony) rendition of Tick Tack – bookies’ sign language - has had his case for age discrimination dismissal denied.

Jamie Aitchison, the commissioning editor for sport at the Channel 4 responsible for Channel 4 Racing where McCririck rose to become a celebrity, described him to the Central London Employment Tribunal as ‘unappealing and irritating to many current and potential viewers’.

McCririck lost his job as the TV station won more prestigious racing coverage and turned to Clare Balding and a ‘classier’ presentation team. Balding was formerly a racing presenter at the BBC whose equestrian knowledge and TV presence is greatly admired. She became a star anchor woman for the BBC at the 2012 Olympics and still does work for the BBC.

Flamboyant McCririck, also known for his Sherlock Homes dress sense and elaborate jewellery, was described at the hearing as a ‘pantomime persona’ who had become ‘unpalatable to Channel 4 Racing’s (maturing) audience’.

The case drew to a close in mid-October, as reported in ThisWeekinFM, with the Tribunal retiring until yesterday (Wednesday 13 November) to consider their decision. They unanimously ruled that McCririck had not been discriminated against on the grounds of age - the 73 year old was not re-employed by a new production company (IMG Media Limited) working for Channel 4. McCririck had been involved with the TV station for 29 years.

However, McCririck had enjoyed a certain celebrity status – appearing on interview and reality programmes in which he had aired bigoted and chauvinist views. He defended this by stating to the Tribunal: "This is a different persona. You are putting on a performance - you are doing a pantomime act."

This ‘persona’ clearly affected the outcome, with the Tribunal’s 44 page report declaring: ‘From the evidence before us, it is clear that Mr McCririck's standing went down as his celebrity profile increased and further evidence of his personal behaviour and opinions became public knowledge.’

The Tribunal were sympathetic to Channel 4 and IMG’s aim to attract a ‘younger and broader audience while maintaining its existing horse-racing audience of down-market males over 55’.

McCririck is reported to have said after the outcome: "This is an historic setback for all employees in their 30s to their 70s. My failed legal action ensures that anonymous suits and skirts, who control the media, numerous other businesses and the public sector, will now enjoy complete freedom to replace older employees whatever their unimpaired ability and merit.”

Rumours that McCririck raised both hands to touch the top of his head whilst declaring odds of 9/4 on an appeal have been discredited.

Readers may be interested in ThisWeekinFM’s recent Legal Article on Changes to Employment Law and Tribunal Fees http://www.twinfm.com/article.php?artid=150&title=Legal&article=employment-law-update