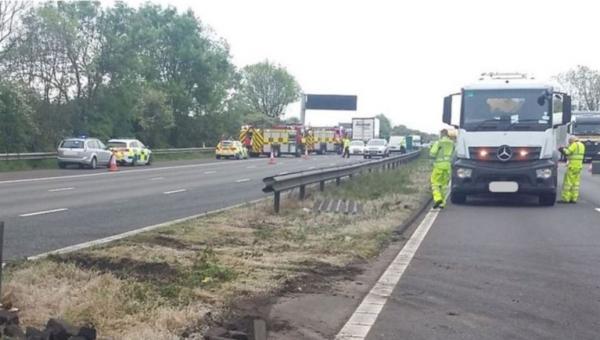 A man who caused a crash and then blamed it on the other driver and then tried to claim for damages and a personal injury has been jailed for six months.

Following an investigation by officers at the City of London Police’s Insurance Fraud Enforcement Department (IFED), Mohamed Rahman, aged 27, from South Wales was sentenced at Cardiff Crown Court on Tuesday 16 May for fraud by false representation after he caused a collision on the M4 Severn Bridge by the tolling booths on 1 June 2016.

CCTV footage showed Rahman driving his Toyota Corolla towards the tolling booths. He tries to cut his car into the inside lane where other traffic is queuing for an open booth. By attempting to cut into the lane, Rahman damaged the front offside of a Volkswagen Golf. Rahman and the victim got out of their cars and exchanged details; the victim also took photographs of the damage that Rahman had caused to his car.

After the collision, Rahman claims to have spoken to a friend who suggested he could make some money by blaming the other driver and making a claim against the driver’s insurance company.

On 2 June 2016 Rahman contacted his insurer and claimed that he was driving in the correct lane towards the tolling booth when the victim had damaged his car by trying to cut into the lane Rahman was in.

Rahman was then contacted by a claims management company, who he told the same account. He also contacted a local solicitor’s firm to instruct them to make a personal injury claim on his behalf. Again he gave them the same account and claimed that the victim had collided with him and as a result it had reignited a painful back injury.

Suspicions of Rahman’s false claim was raised by AIG when they were contacted by Rahman’s insurer; Zurich. Zurich held the victim accountable for the accident but the victim provided a different account of the accident and AIG investigated the incident by obtaining CCTV footage. The footage showed Rahman’s account of events to be wrong and the case was referred to IFED for investigation.

Officer’s voluntary interviewed Rahman under caution at Cardiff police station on 5 October 2016; he was shown the CCTV footage and asked to account for the claim he had made. He said that at no point had he accused the victim of driving into him and that his insurer and solicitor must have misheard him when he spoke to them on the phone.

Subsequently, officers obtained telephone recordings, in which Rahman can clearly be heard to say that the victim had driven in to him and that he was not responsible for the collision. With this evidence now available, officers re interviewed Rahman on 7 December 2016 at Newport Police Station and Rahman made full admission to the false claim. He was then arrested and charged for fraud by false representation.

City of London Police’s Detective Constable, Ian Cambridge who led the investigation said: “Rahman tried to pull the wool over everyone’s eyes in order to make a profit. This greed however has only led to him receiving a criminal record and a prison sentence. By working together with all of those involved including the insurers, solicitors and the victim, we have now managed to ensure that he has been brought to justice."

A detailed investigation following Wednesday's fatal road traffic collision on the M6 in Staffordshire is continuing. Officers from the Collision Investigation Unit of the Central Motorway Police Group are appealing for witnesses following the two-vehicle collision which occurred at around 4.30am. It happened on the southbound carriageway, one mile prior to junction 14 (Stafford North).

The collision involved a blue Mercedes articulated lorry and a blue Nissan Micra. Sadly five of the occupants of the Micra, four females and a male, were pronounced dead at the scene. The front seat passenger was taken to the Royal Stoke University Hospital where he remains in a stable condition.

The driver of the lorry who was arrested has now been released under investigation. He had been arrested on suspicion of causing death by dangerous driving.

Picture: Main - the M40 was closed as a lorry hit a car, killing five people and hospitalising a sixth. Below - the video footage of a man hitting another car which he subsequently claimed hit him