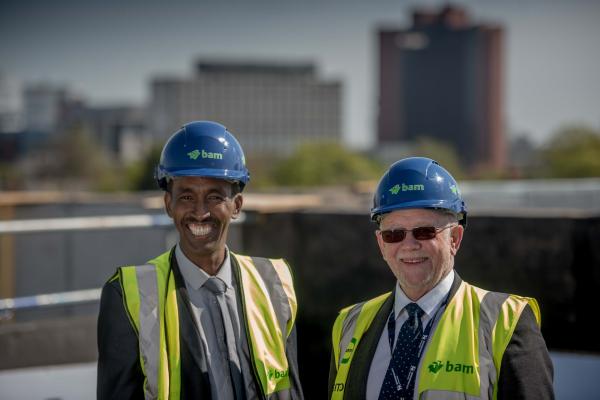 A £41 million university building in Birmingham has taken a major step forward as the finishing touches have been made to the development.

Contractor BAM and local stakeholders were joined by staff and students from Birmingham City University at the institution’s new Health Sciences and Education building to mark the traditional topping out ceremony and celebrate a key milestone in the delivery of the facility.

The 10,500sq.m extension on Westbourne Road in Edgbaston forms part of the University’s City South Campus.

The new development, set to open in 2018, will also enable the relocation of the University’s School of Education, consolidating the Faculty of Health, Education and Life Sciences on to one site.

Designed by architects Sheppard Robson, the building will help reinforce Birmingham City University's status as the region’s largest provider of qualified health and social care professionals to the NHS and producer of more teachers than any other institution in the West Midlands.

The space will offer teacher training and specialist facilities for health sciences including provision for research, a new lecture theatre, a multi-purpose hall, speech therapy, physiotherapy and ultrasound suites, art and technology classrooms and IT hubs.

The building forms part of the University’s £260 million investment into new state-of-the-art facilities which will be strengthened with the opening of the new £57 million Birmingham Conservatoire later this year.

As part of the City South Campus extension, students from the University’s Faculty of Computing, Engineering and the Built Environment have been working alongside BAM to gain real-life experience of working in the construction industry, by putting the theory learned in the classroom into practice.

Colin Harper, BAM Project Manager, said: “This could be Birmingham's most advanced construction scheme. Our sector is undergoing a quiet technical revolution. Digital techniques are helping us and our supply chain deliver both the speed and quality we need for complex modern buildings, like this one for Birmingham City University.

BAM currently employs 160 people at the Edgbaston site, with 80 per cent coming from the West Midlands.

Willmott Dixon is back at Harwell Science Campus in Oxfordshire to deliver another facility that will enhance the campus status as a world leader for science and technology R&D.  The firm has been appointed by the Science & Technology Facilities Council (STFC) for a £23.7m contract to build the Harwell Facilities Building.  This will provide specialist support space allowing researchers to test and commission new scientific equipment for use on the campus and around the world.

It’s less than two years after the company completed the RAL Space facility for STFC, also at the Harwell Science Campus. This provides the largest and most sophisticated satellite design, production and research facility in Europe with involvement in over 210 space missions.

The project is the latest in an array of science and technology facilities that Willmott Dixon is creating.   Others include recent completion of a new home for the Met Office’s new supercomputer, expanding the BioCity complex in Nottingham with an adjacent £26m life science building, as well as a project to build Wales’ first science park on Anglesey.

Birmingham City University has appointed BAM Construction in the Midlands to deliver a major extension to its City South Campus in Edgbaston. BAM will create the...

Sodexo has launched its concierge service, Circles, at two university campuses as part of its Residential Living programme. Designed to give students a helping...

The new facility will include a 22-cell custody block, offices for police and staff, as well as parking and associated external works. The project was procured through...

With COVID-19 causing unprecedented disruption to planned events, facilities management companies are donating potentially wasted items to those in need at this difficult...

The Roads Are Greener On The Other Side

Residents at Bristol City Council’s Ashton Rise development will drive on some of the UK’s greenest roads when they move in next year. Willmott Dixon is...