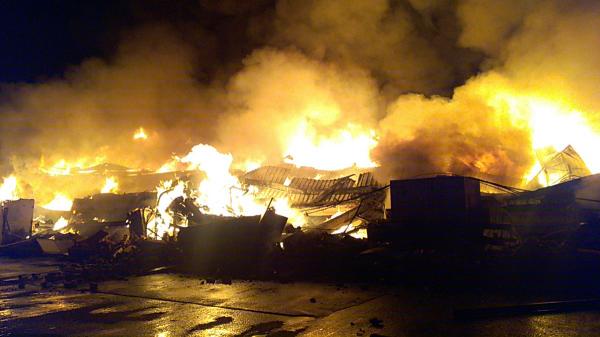 Twenty five fire engines and around 140 firefighters and officers were called to a fire at a warehouse on White Hart Lane in Tottenham on Monday 18 night.

At the height of the incident, four aerial appliances and five fire rescue units were also in attendance to help fight the fire.

Approximately 75 per cent of a single storey warehouse measuring 200m x 150m and storage units have been damaged by fire. No one was in the building when fire crews arrived but London Ambulance Service said one patient was treated and taken to hospital with burns to a hand.

During its early stages the blaze was extremely visable across north London and the Brigade's 999 control officers received around 50 emergency calls.

Crews remained at the scene throughout the night and into Tuesday with some still on site on Wednesday.

Station Manager Daniel Alie, said from the scene: "Crews worked through the night to bring the fire under control. There was a partial collapse of the rear of the building and crews used aggressive firefighting tactics to help protect unaffected parts of the structure."

Due to smoke from the fire, during the night residents were advised to keep their windows and doors closed as a precaution but no properties needed to be evacuated. The cause of the fire is under investigation.

Eight fire engines and 58 firefighters and officers were called to a fire at a sauna in London's Covent Garden on Saturday 16.

A small part of the boiler room in the basement of the building was damaged by fire. Approximately 20 people left the flats above the sauna before the Brigade arrived. There are no reports of any injuries.

Eight fire engines and 58 firefighters and officers were called to a fire at a factory and offices in Harrow on thurs 14. A warehouse building of two-storeys was destroyed in the blaze. A cordon was put in place as there were cylinders involved.

Twelve people were evacuated from nearby properties as a precaution. There were no reports of any injuries.

Station Manager Jason Jones, who was at the scene, said: “We had a very well developed fire which was extremely visible from quite a way out. There were propane cylinders involved so a hazard zone was set up as cylinders can explode when exposed to heat. The site is next to Headstone Lane train station and trains were stopped."

The Brigade’s 999 Control Officers took almost 40 calls to the fire.