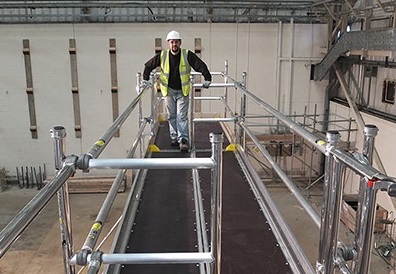 After training a record number of over 65,000 people to work safely at height last year, the Prefabricated Access Suppliers & Manufacturers' Association (PASMA) has unveiled its latest training course, Towers for Riggers.

Aimed at advanced users of mobile access towers, it is currently available for all PASMA Hire and Assembly Members.

Delegates on the course are taught to assemble and dismantle complex towers in configurations, including towers with a large decked area, high level towers (those taller than 8m used externally and 12m internally), bridging structures, end and side cantilevers towers, linked façade structures and stepped towers (towers on stairs).

Towers for Riggers takes place over five days. It brings together the in-depth knowledge usually taught in several of PASMA’s one-day courses, leaving successful delegates able to build a range of towers in non-standard configurations to suit any task for which a tower could be useful.

At the course’s launch, PASMA’s Director of Training, Stuart Hopkins, said: “Towers are a great option for a wide range of jobs, but they are often ignored because people can sometimes think of them as only being for quick up-and-down jobs. The advanced structures will be used in much more complex situations than in our previous courses, which will be a huge advantage to our Hire and Assembly Members.”

Pictured: Towers for Riggers is the latest course from trade body, PASMA