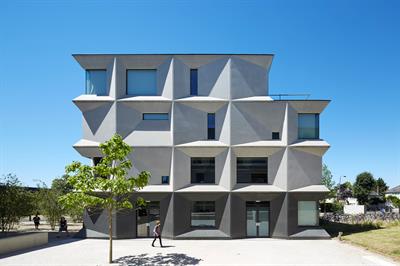 In the next major step towards redeveloping the Old Royal London Hospital into a new Civic Centre, Tower Hamlets Council has appointed the architect for the project.

The London borough has chosen the internationally renowned architect Allford Hall Monaghan Morris (AHMM) as the lead consultant and designer for the £77 million scheme.

Last November, the council approved the creation of a new town hall on the site of the Grade II listed former Old Royal London Hospital in Whitechapel. The scheme also includes the major refurbishment of John Onslow House in Roman Road which AHMM will also manage as lead design consultant.

The council’s Civic Centre is a major part of the wider regeneration of Whitechapel which includes the opening of Crossrail in 2018, alongside 3,500 new homes, 5,000 jobs, new retail opportunities and public spaces to be delivered over the next 10 years.

The successful bid had to demonstrate expertise and experiences in a number of areas, including working on new building and refurbishment projects of a similar complexity and scale, notably redeveloping listed buildings.

Bidders were also required to ensure that they could provide strong project management throughout the contract and ensure that work would be delivered within agreed costs.

As part of the winning tender AHMM has also agreed to provide a range of wider community benefits that include providing access to jobs and work experience for residents. It will also work closely with schools on curriculum projects and mentor pupils interested in a career in design and architecture.

“Whitechapel as a whole is undergoing massive changes and the Civic Centre will be a key building contributing to the regeneration of the area and securing the future of a building of heritage importance for the borough,” said Will Tuckley, CEO, Tower Hamlets Council. “We are also pleased that a firm with a clear and proven award winning design flair will be at the helm of what is both a Grade II listed and much loved landmark building in the East End of London.”

One of the most exciting challenges of the project will involve bringing the eighteenth century Royal London Hospital back to life as a public building open to the borough.

The contract will cover all the key consultant, design and planning management milestones, e.g. the appointment of contractors and the work taking place on site with the building earmarked for completion by the end of 2021.

Police in Tower Hamlets are appealing for witnesses after young mother was injured and subsequently died in hospital after a load of bricks fell on her from a crane...