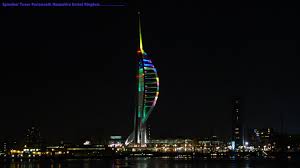 It dramatically overlooks the harbour, the Gunwharf Quays retail and leisure complex, Portsmouth Historic Dockyard, Portsmouth itself and its neighbouring towns and suburbs. Stretching for up to 23 miles in any direction, the 350?panoramic views from the top of the Spinnaker Tower are truly stunning allows visitors to see up to 23 miles in any direction.

The 170m high tower was opened in 2005 and was installed with analogue CCTV typical of the time. Nine years later, the team at Spinnaker Tower needed to expand its CCTV coverage to include additional facilities such as a ground floor gift shop. Due to gradual building changes over the years, the existing camera network was not providing sufficient levels of security across all areas.

ADT was also able to make use of the existing cabling from the previous analogue system, meaning that the upgrade was able to take place efficiently and with no disruption to the Spinnaker Tower, with visitors enjoying the usual opening times.

ADT reports it has provided additional coverage in all areas of the building with fewer cameras and by repositioning them throughout the building, has helped to reduce overall costs and improve surveillance.

Pictured: The impressive Spinnaker Tower in Portsmouth has had an upgrade in its CCTV security system by ADT

Tyco has launched the new Illustra 825 Fisheye Camera, designed for retail environments and other public areas. The camera provides a 180° panoramic view when...