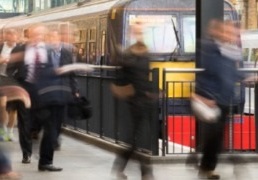 Four in five passengers (81 per cent) are satisfied with their train journeys overall, according to the latest independent nationwide survey commissioned by the Rail Delivery Group (RDG), yet rail companies acknowledge they must do better to improve services and reliability.

The RDG refutes any suggestion that respondents to the survey were railroaded in to positive answers or the stats extracted kindly to conceal real obstructions and the organisation is promising a £50 billion-plus Railway Upgrade Plan and more than 5,500 new train carriages by the end of 2020.

Currently business and commuters users along with leisure travellers take 1.7 billion passenger journeys a year – more than 4.5 million a day on average (when they not fighting cancellations and strikes).

Jacqueline Starr, Rail Delivery Group MD of Customer Experience, representing train operators and Network Rail, said: “We know we must do better. We’re sorry when customers don’t get the service they expect, including those affected by strikes. Everyone in the railway is working hard to make train journeys better from start to finish.

“After decades of under-investment and with passenger numbers soaring, the railway is full in many places. Rail companies are working together to deliver improvements and more new train carriages to tackle congestion and make journeys faster, more comfortable and more reliable. While we build the bigger, better railway the country needs, there will be some disruption.”

Eight per cent of passengers said they were dissatisfied while 11 per cent were neither satisfied nor dissatisfied, according to the latest National Rail Passenger Survey by independent watchdog Transport Focus.

Changes to the way ticket prices are calculated are set to be trialled by train companies with a view to guaranteeing customers get the best possible deal every time they...

The new Mayor of London Sadiq Khan has confirmed that the much delayed Night Tube services will launch on August 19. Central and Victoria lines to go live first, with...

Customers can now use Android Pay on their mobile phone to travel on Transport for London (TfL) services, including the Tube, buses and trams, as well as most National...