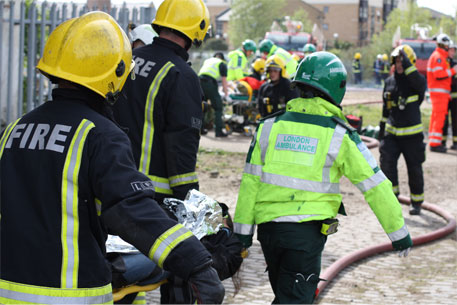 The exact details of the exercise were kept secret right up until the start on Sunday at 12:00pm in order to ensure the day was as realistic as possible for everyone taking part.

Around 250 emergency service personnel, staff from South Eastern Trains, Network Rail  and other volunteers took part. Local residents were warned in advance as the scene was to be very realistic.

"There are going to be a lot of firefighters, police officers and ambulance crews in the area but we will endeavour to keep disruption to a minimum.

Richard Welch Borough Commander for Bexley said: "Whilst this scenario may appear worrying and rail crashes are extremely rare, exercises like this are a vital way of practising our skills and ensuring that we are ready should there ever be a major incident in the capital.

"Days like this are a chance for firefighters to practise search and rescue skills as well as testing how we work with other agencies in the event of a major incident."

The exercise had two locations - a road traffic accident on a bridge near a railway station and a train derailment nearby.

(The train crash was on a section of line not used on a Sunday; the bridge was closed to pedestrians on the day.) Volunteers from the Railway Industry First Aid Association played casualties in need of rescue on the day.

The scenario was devised by London Fire Brigade with support from Network Rail, South Eastern Trains, Southern Rail and the British Transport police. London Ambulance Service, The Metropolitan Police Service and London Borough of Bromley are also took part in the training. 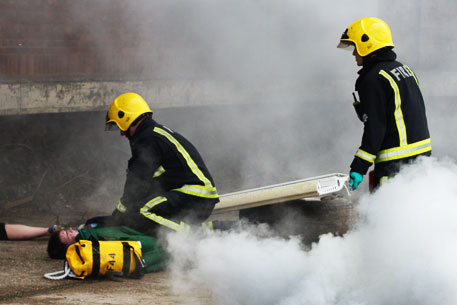 Last year saw an even bigger exercise. Over the last weekend in April, Millennium Mills in East London was into the site of a major aircraft crash, complete with a real plane fuselage, hundreds of tonnes of rubble and some actors playing the parts of the injured passengers.

Over 220 emergency service personnel from London and across the country took part in the exercise, including specialist Urban Search and Rescue teams, Metropolitan Police Service – with a diving team and the London Ambulance Service. 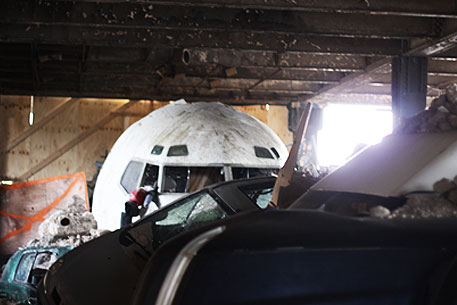 None of the emergency service personnel knew what they would be facing when they arrived at the scene to make the exercise as real as possible. To maintain the realism further, actors wearing prosthetics were used simulate the badly injured passengers from the aeroplane.

At the time, London Fire Commissioner, Ron Dobson, said: “It is only through this kind of exercise that we can fully test our plans and ensure that all the agencies which would be involved can respond effectively together, in a co-ordinated manner.

Picture: Main - the latest training exercise on Sunday 21 June. Plus another from this year and the aeroplane from last.