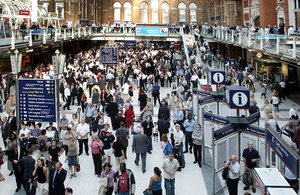 Rail passengers will soon be able to claim compensation if their train is more than 15 minutes late under an improved compensation scheme announced by the Department for Transport (DfT).

‘Delay Repay 15’ will be introduced within months on Govia Thameslink Railway services, including Southern, and then rolled out across the country.

Transport Secretary Chris Grayling said: We recognise that, above all else, passengers want a reliable train service but when things do go wrong it is vital that they are compensated fairly. ‘Delay Repay 15’ is a major improvement for passengers and we are working with train companies to make it as easy as possible for passengers to claim their rightful compensation.

"Together with the Consumer Rights Act, this policy shows we are putting passengers first and making sure they receive due compensation for poor service."

Following its introduction on GTR services, ‘Delay Repay 15’ will be rolled out across the network starting with the new South Western, West Midlands and South Eastern franchises.

Southern have made no comment available, however, RMT General Secretary Mick Cash said: “RMT entered talks with Charles Horton from Southern Rail on October 12 in good faith and with every intention of trying to reach an agreement. However, it became clear right from the outset that Mr Horton is refusing to stick by the assurances he gave that he can absolutely guarantee a second member of staff on all current Southern services with a conductor. This dispute isn’t about who open and closes the doors, it is about that absolute guarantee of a second safety-competent member of staff on these Southern services. RMT is angry and frustrated that a golden opportunity to resolve this dispute has been wrecked because Mr Horton has reneged on commitments he has given through the media. Passengers will rightly share our anger. The programme of industrial action goes ahead.”