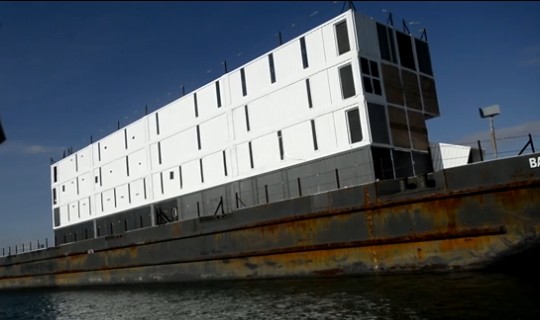 Two of Google’s ‘mystery barges’ have been spotted docked in San Francisco Bay (Pier 1 Treasure Island Marina) and not moored off the Coast as some national press has reported. Those in the know will be aware that these are just two of a flotilla of four that Google has been developing for over three years.

That is not to say that those in the know, know what their eventual use will be. Some have suggested that floating showrooms and party venues were the most likely as the barges’ discovery coincided with Google having products to launch. (Google’s to be built offices in King’s Cross in London will feature Fun Floors to aid creativity which include gardens, a  swimming pool and five-a-side football pitch.) No one has conjectured that five-a-side soccer or grid-iron pitches could be included – partly because the link between showrooms, parties, products and barges is a little flimsy...and partly because the difficulties or retrieving lost balls is perhaps even beyond Google’s abilities.

Suggestions that they could become permanently moored, avant-garde public showrooms are worth considering.

However, conjecture based on the fact that Google has registered patents for barges to be used as data centres might be nearer the mark.

Free cooling, naturally off-site and moveable for security – and even the potential to harness wave power adds credence to the suggestion. Water, salt and sea sickness might be the elements less attractive to the idea – although Google has previously utilised a sea water cooling system at one of its data centres in Finland.

It has been established that Google has sought permission to move its barges to and from different ports on the US seaboard. But Google remains tight-lipped on the subject of their useage. However, reports that they are destined to have a luxury fit-out seem to be a conflict with the known design – four-storeys of welded shipping containers which were put together by Turner Construction. (Only two of the barges, thus far, feature the shipping container superstructure. Shipping containers have often been utilised for housing servers.)

Although a great a good deal of the exhibits at the Data Centre World exhibition were specific to ‘the data bit’ much of what was going on was very much...