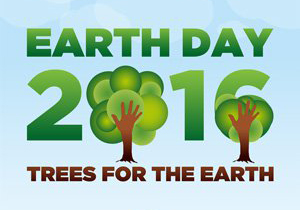 Today (Fri 22) is the 46th anniversary of Earth Day a movement that continues to inspire, challenge ideas, ignite passion, and motivate people to action.

However, the organisers would like people to realise Earth Day is more than just a single day because big stuff needs to happen. And the Earth Day folk (a bunch of 1970s hippies) have set a target for 7.8 billion trees to be planted by volunteers and funded by companies and governments in the next four years. The dude's are also calling for nations to divest from fossil fuels and make cities 100% renewable.

It is estimated that over one billion people in 192 countries will take action centred around Earth Day - cleaning up their local communities, meeting with their elected officials, planting trees, and teaching their children to protect the planet.

This year, United Nations Secretary General Ban Ki-moon invited every world leader to the United Nations to officially sign the Paris Climate Agreement reached in December 2015. It is no coincidence that the agreement is being opened for signatures on April 22nd, Earth Day.

“Earth Day is the largest, most recognizable face of the environmental movement,” said Kathleen Rogers, president of the Earth Day Network. “Millions of people in dozens of different countries will become lifelong environmentalists. Hundreds of thousands will be children. They will join the more than 1 billion people who already use Earth Day to focus on the urgent need to stabilise and reduce global greenhouse gas emissions, fight climate change, act locally, become climate voters and protect their children’s futures.”

This year the Earth Day Network is focusing on the urgent need to plant new trees and forests worldwide. Throughout the year, EDN sponsors and takes part in tree plantings across the US and worldwide. But this year it is raising the stakes. As we begin the four year count down to Earth Day’s 50th anniversary in 2020, the Earth Day Network is pledging to plant 7.8 billion trees worldwide – one for every person on Earth.

“We have no higher priority this year than to make sure the United States, China, India, the EU, and all the largest CO2 emitters sign the Paris Agreement. We need to prove that what happened in Paris last December was not all talk. We need to take action. Signing the Paris Agreement this Earth Day at the United Nations is just the beginning,” continued Kathleen Rogers. “That, coupled with our global activities, will make this the largest, most significant Earth Day in years. And it’s the perfect start in our countdown to Earth Day 2020.”