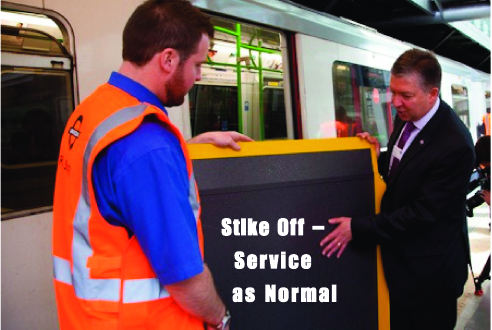 London Underground MD Mike Brown has just confirmed he has confirmation from the leaderships of the RMT and TSSA unions that this week's Tube strike is suspended, following constructive talks at ACAS and a fresh offer of further talks on LU's modernisation plans.

Today's proposal made at ACAS will see LU and trade unions enter a period of intensive discussion on LU's proposals and suspend further industrial action.

The proposal made at ACAS includes the following commitments:

Two months of intensive talks, to examine LU's proposals in detail, during which time there will be no further industrial action; and,

A review, station by station, of LU's proposals which could result in some ticket offices remaining open.  We have always been prepared to listen to constructive proposals.

LU Managing Director Mike Brown MVO said: “The hard work of both the LU and Union negotiating teams and the progress we have made at ACAS over the last few days means we can now do without further unnecessary disruption to Londoners”.

Fit for the Future

LU has set out its vision for the future of the Tube ncluding a new 24-hour 'Night Tube' service at weekends and more staff visible and available at stations to help customers buy the right ticket, plan their journeys and keep them safe and secure.

LU proposed that Tube station staff would not be based in ticket offices but in ticket halls, on gate lines and on platforms. Changes would be implemented without compulsory redundancies.

Following further talks at ACAS, your Executive Committee considered a proposal from London Underground to resolve our dispute. Having considered this proposal, your Union has suspended all industrial action including the strike that was due to commence from this evening. Therefore you are instructed to work normally.

I can advise you that the full details of the deal reached at ACAS and subsequently confirmed by formal correspondence from LUL is as follows:

1. London Underground would agree not to implement its Fit for the Future – Stations proposals, as set out in the HR1 and Section 188 Notice, until it has undertaken further meaningful and detailed discussions with the trades unions. This period of consultation would take place over the period Wednesday 12 February 2014 until week ending 4 April 2014. The Change Assurance Plan and Equality Impact Assessment (EQIA) would develop during these discussions, which would take place at Company Council level, agreeing its own terms of reference.

2. During this period of discussion London Underground would put on hold all Voluntary Severance applications received and not request any new applications, and would also remove from its e-Zone all learning material associated with its Fit for the Future - Stations proposals.

3. In response to points 1 and 2, the trades unions would agree to enter into detailed discussion in respect of London Underground's Fit for the Future – Stations proposals. It is acknowledged that as a result of these discussions with the trades unions, the proposals could be subject to change.

4. During the above consultation period, London Underground would agree to discuss, amongst other things, a station-by-station review including ticket office closures which could result in some ticket offices remaining open, the proposed methods for stations' job selection, proposed job roles and proposed stations categorisation for Fit for the Future - Stations.

5. RMT and TSSA would withdraw all industrial action called to date in response to London Underground’s Fit for the Future – Stations proposals.

6. All parties would commit to return to ACAS on week ending 4 April 2014 to report on progress.”

We remain firmly against these cuts which we will continue to resist in our discussions with management. I will be sure to keep members fully informed of any further developments.

Things we know about the RMT we didn’t last week

Bob Crow used to be a member of the Communist Party

The RMT will hold a Garden Party in support of The Cuba Solidarity Campaign ‘against the US blockade of Cuba and for the Cuban peoples' right to self-determination and sovereignty’. The party will be held at Maritime House, Clapham – one of the RMT’s substantial portfolio of properties.

Commie Bob turned capitalist to oust low renters in RMT’s property portfolio (including John Prescott) to turn it into a high profit yielding source of income that helps sustain strikers.