Two from Phones for You Plus Smash & Grabbers Gang Sent Down 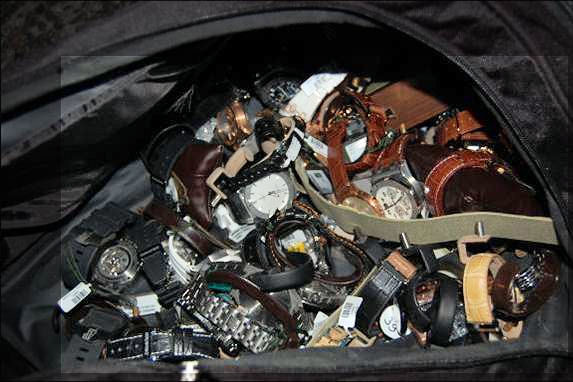 Seven men have been jailed for 64 years for their varying involvement in 10 smash and grab raids across London. Two more people are to be sentenced next month.

Reece Dunford played a role in all the robberies at high-end shops in the West End. Sometimes he carried out the raids, other times he handled stolen goods. He was arrested after trying to organise his own smash and grab last year.

Dunford was assisted on various occasions by the eight others sentenced alongside him on Thursday, 30 July at Kingston Crown Court.

One of his cohorts was Hatton Garden jeweller Yair Cohen. In 2013, Dunford bought watches stolen during a raid on Selfridges in which robbers - previously sentenced and not amongst those being sentenced on Thursday - disguised themselves in burkhas. Dunford sold the watches on to Cohen.

Dunford and Cohen fell foul of the police after the former orchestrated a morning raid on Mappin and Webb in the City.

Acting under Dunford’s instruction, Vincent Kamara, David Mays and Danny St Luce drove up to the store on two high-powered motorcycles. They used one of the bikes to burst through the doors.

Two of the men - believed to be Burbridge and Mays - ran inside, still wearing their motorcycle helmets and armed with sledgehammers and an axe. A third man, believed to be St Luce - waited outside.

They threatened terrified members of staff before Kamara directed Burbridge and Mays towards the shop displays with the most valuable watches. They smashed through the glass cabinets and made off with over £300,000 of Rolex watches, leaving the sledgehammers and an axe behind at the scene.

The watches were dropped off at a house linked to the gang in Islington but less than three hours later, detectives from the Met’s Flying Squad swooped on the address.

In the living room, they caught Dunford and Cohen red-handed, surrounded by the stolen watches with price tags still attached.

Kamara was jailed for 12 years for conspiracy to commit robbery at Mappin and Webb.

others associated with the gang will be sentenced in August.

Phones for you and you

Two men have been jailed for conspiracy to steal over £45,000 worth of mobile phones from stores across London over a two-year period.

All three defendants were identified after officers spent days viewing CCTV footage from the 34 stores targeted. The CCTV showed the defendants working as a team to distract staff and block their view, while display phones were stolen either by sheer force or by cutting the security cabling. It is estimated that the total value of losses to the stores is in excess of £45,000.

This sentence follows an investigation by the Metropolitan Police Service National Mobile Phone Crime Unit (NMPCU) into an organised criminal network, which targeted numerous retail phone outlets in London between 5 February 2013 and 22 January 2015.

Detective Sergeant John Maude, NMPCU, said: "This is an excellent result which has seen two members of an organised criminal network jailed for their part in a conspiracy to steal from mobile phone stores."

A Carphone Warehouse spokesperson said: "We will continue to work closely with the Metropolitan Police Service to assist them with any further enquiries."