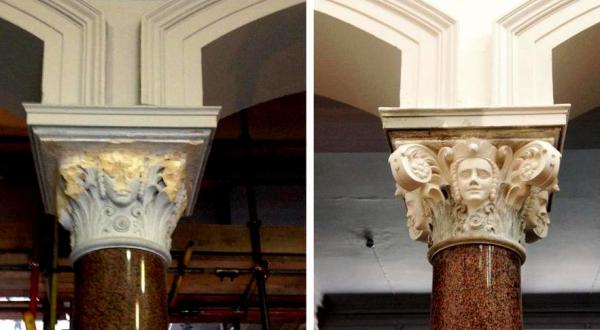 York Art Gallery has had two ornate Victorian columns restored back to their former glory as part of the continuing refurbishment project at the venue.

The gallery is set to open in the summer after an extensive £8 million internal and external restoration lasting two and a half years.

The previously hidden columns which date back to the building’s construction in 1879 have been given a new lease of life by craftsmen from Pudsey-based Ornate Interiors.

Cladding applied during a previous refurbishment of the venue obscured the Victorian columns and each originally featured four scroll effects and four ladies’ faces.

Carved from sandstone, these features had been chiselled off to make the cladding process easier. Ornate Interiors used the services of Dick Reid, a renowned master carver employed by York Museum Trust to make a clay mould in-situ at the gallery. Ornate Interiors then made a rubber mould at its workshop and used plaster cast to recreate to the original design.

“We sent this back to the modeller at his workshop to get rid of any blemishes and imperfections,” said Ronnie Clifford, MD, Ornate Interiors. “These then came back to us which we once again re cast and then we dressed the original stone back to enable us to re fit the new eight scrolls and eight faces to return it to its original look.”

Ornate Interiors' work at the venue, on behalf of contractor Simpson of York, involved the reinstatement and restoration of mouldings using both fibrous and in situ moulds. Additional traditional lime plastering placed upon brickwork and laths and some restoration of existing plasterwork also formed part of the workload.

Picture: Before and after – two ornate Victorian columns have been restored after diligent work by Ornate Interiors

Giving a Lift North of the Border

Glassolutions played a key role in a £9.5m project to upgrade the famous Waverley Steps between Edinburgh station and the Scottish capital’s city...