Virtual Unknown is Really the Linesman for the Country 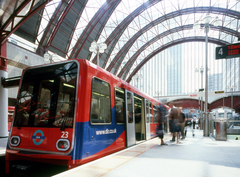 Keolis, in a joint venture partnership with Amey (70:30), has secured the franchise to operate and maintain the Docklands Light Railway in London for the next six and a half years.

The two parties will hold  responsibility for all train and passenger services across the network, including the maintenance of over 34km of infrastructure, 38 stations, as well as rolling stock.

Amey is and expert in construction and facilities maintenance - Keolis is an international rail and transport provider.

The franchise will commence in December 2014 and will run until 2021 - with the possibility of extensions.  According to Keolis, 'the DLR is an essential part of London’s internationally recognised public transport network and the new franchise will ensure that it becomes a showcase for automated light rail networks globally'.

Alistair Gordon, chief executive of Keolis UK, said: “This win is a major achievement for Keolis. We will be working with Amey and DLR Limited to deliver the next chapter in the history of the DLR.

“we are the world’s largest operator of light rail networks so our global expertise will enhance one of the capital’s iconic public transport networks.”

Keolis is established in 15 countries on four continents. Here in the UK the company is involved in joint ventures on four rail franchises: Southern, Southeastern, London Midland and Transpennine Express.  Since December 2012 Keolis has been the lead operator of Nottingham Trams.

The British Department for Transport only recently awarded the Thameslink Southern and Great Northern (TSGN) franchise to Govia, an 18-year Keolis/Go-Ahead partnership (35%/65%). This seven-year franchise will generate £1.3 billion annual revenue. TSGN has the largest passenger numbers (273 million passenger journeys annually, totaling 4,875 million passenger miles), trains, revenue and staff. It serves London and several major regional cities to the south (Brighton, Portsmouth), and the north (Cambridge), as well as Gatwick and Luton airports and the international hub of London St Pancras.

A second phase will start in July 2015 and will encompass the Southern and Gatwick Express routes and the integration of 4,000 employees.

Keolis Commuter Services began operation of the largest commuter rail contract in North America on Independence Day - the Massachusetts Bay Transportation Authority's (MBTA) 13 commuter rail lines. Keolis pledge its allegiance to principles that  increase on-time performance and improve safety, cleanliness and customer service. The $2.6 billion, eight-year contract was won in January. The MBTA is the fifth-busiest rail system in the US, serving 127,000 passengers daily with 13 lines, 138 stations, and 500 daily trains. 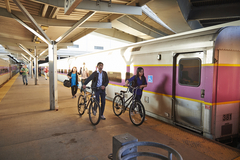 Keolis officials said passengers will begin to see changes immediately including the launch of a staffed customer service centre open seven days a week. Other improvements will include freshly cleaned trains and stations, new signage, and repairs to damaged seats. New pocket timetables, featuring larger, easier-to-read system maps, will be distributed at the major stations. Keolis will also be introducing the first official MBTA Commuter Rail app which is designed to make it easier for passengers to plan their journey.