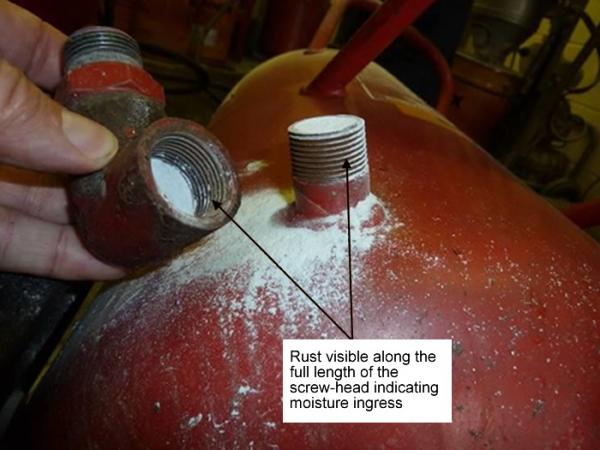 In its warning on the Norfolk range of large dry powder fire extinguishers, manufactured before 2009, the HSE states that they may be affected by moisture ingress at a threaded joint at the base of the unit, rendering the unit inoperable.

Unfortunately, the problem may not be identified during routine service inspections and the concern has come about from a recent fire on a chemical plant when three wheeled dry powder fire extinguishers, containing 45kg of Monnex dry powder, failed to discharge when activated.

This safety alert relates to dry powder units manufactured between 1970 and 2009. An identifying feature of these units is that the discharge hose is coupled at the base of the unit via a threaded metal elbow joint. The HSE is advising businesses and organisations to do the following:

The flexible discharge hose is normally removed during servicing however the elbow joint is not usually disturbed. It is believed that water ingress at this joint resulted in caking of the dry powder within the elbow joint. The caked powder may fall back from the discharge tube into the body of the extinguisher and so not seen during basic servicing. Upon activation of the extinguisher, the caked powder can block the discharge hose and render the unit inoperable.

If you are unsure if your units are affected by this safety alert, consult Britannia Fire Ltd.

Picture:    The Norfolk range of large dry powder fire extinguishers, manufactured before 2009, may have problems with water ingress.

Figures obtained by UCATT have revealed a decline in the number of inspections that HSE is undertaking on construction sites. The construction union UCATT made a...

With an enviable record in health and safety, the HSE has published six themes that its new five-year UK strategy will have for the country. Despite the...

Two global operators have been found guilty after a worker was killed and another seriously injured during construction of an offshore wind farm.  The incident...

A scheme designed to shift the cost of regulating workplace health and safety to businesses has proved ‘effective and should stay’ says the Health and Safety...