Was Serco a Security Risk? 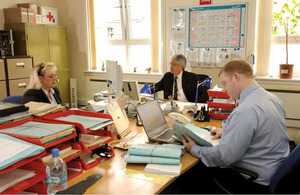 The MoD has taken back a contract from Serco that included military vetting and decided to do the job in-house.

The £36 million contract which the outsourcing business had with the MoD was supposed to both reduce costs and manage effectively national security vetting but while Serco argues it was ‘mission accomplished’ others had argued it was found wanting.

According to the current issue of Private Eye, security vetting officers inside the MoD ‘had questioned the ability of a private company to provide such important security clearances’. Given that it had in the contract control over 80% of the 135,000 annual security passes, this was no minor matter.

One possible reason put forward by Private Eye  for the MoD deciding on the in-house route was also that of security as it is possible a Chinese investment bank might buy into the Group and pose a potential security risk.

When asked for a response from the company on this loss of the contract a different angle was taken by a spokesman: “Serco has successfully transformed Defence Business Services (DBS) into a lean and effective shared services centre achieving over £60 million (gross) in savings in the first three years,” he told TwinFM. “We have received many accolades from our customer for our performance on DBS, including a recent Cabinet Office smarter working award. The contract has exceeded expectations and we will hand back the senior management of this high performing service to MoD in April as planned.”

Picture:      Serco has lost its £36 million Defence Business Services contract although it argues that it was planned and it had “transformed” the organisation