When Space is No Object 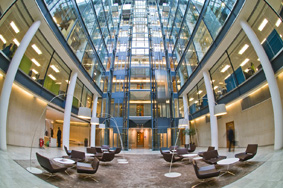 A new report finds that UK start-ups are ‘booming' despite the lack of office space.

The findings come from Office Genie shows that the UK start-up market has continued gaining momentum over the last year, despite a lack of available office space.

The report shows that demand for serviced office space has grown by an average of 24.3% over the last year. Some areas are showing particularly high demand as start-ups realise that they cannot afford the price or rent in London, forcing them to refocus their attention elsewhere.

It quotes the average cost of renting a desk in London at £512 per month. Liverpool and Manchester are showing particularly high demands with a 44.5 percent and a 43.6% increase respectively due to rent prices being less than half of those seen in London.

“For years we have anticipated that the London business landscape will reach boiling point and that demand will significantly outstrip supply,” explained Peter Ames, Head of Strategy and Spokesperson, Office Genie. “With the data showing more and more small businesses unable to cope with the inflated costs of the capital and looking further afield for office space, perhaps we are now reaching this point of saturation.”

Despite the problems of space, W1 Office, a provider of virtual office space in Central London, believes small companies can find round the physical constraints that may appear daunting. “It’s great news that the UK’s start-up market is continuing to grow,” said a spokesperson for W1 Office. “The prices of rent in London are generally prohibitive for smaller companies but this doesn’t mean that start-ups can’t benefit from the clout that comes with a London postcode or telephone number."

The virtual office means that a business can have a W1 postcode and a 020 phone number no matter where in the world it operates from. “With the right service you can even book meeting rooms in the city for when important clients are coming to town,” continued the spokesperson. “This means that you can take advantage of the cheaper rents in the North while still taking advantage of the prestige that comes with having London written on your business card.”

Picture: Even an ‘exclusive’ place like Portman Square close to Oxford Street can offer a prime and affordable location for any business meeting.