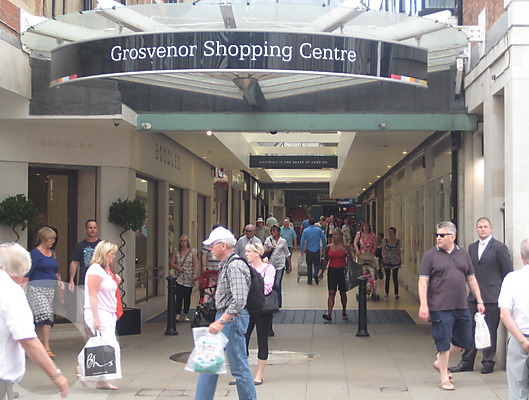 Consternation and a degree of anger were caused when the Grosvenor Shopping Centre took the decision to impose a temporary ban on some mobility-impaired shoppers after Cheshire Fire and Rescue Service expressed concern following an inspection its officers made on 27 January this year on the 1960s’ facility.

In its report it was stated that were ‘serious concerns’ that if a fire broke out ‘some people would simply not be able to get out’. This was enough for the centre to prevent wheelchair users and other mobility-impaired people to enter the building.

Disability News Service (DNS) stated that Laura Smith, Chief Officer of Macclesfield’s Disability Information Bureau – which runs the town’s Shopmobility scheme – said the service only found out about the ban after “shocked” members told them what was happening, even though the scheme is only “a stone’s throw away” from the shopping centre entrance. “Nobody told us,” said Ms Smith. “The majority of people using scooters [in the shopping centre] are from our service. The lesson to be learned is you need to communicate better.” According to DNS, Smith said that security staff at the shopping centre had shown a lack of sensitivity, empathy and knowledge of disability.

The partial ban was lifted on 5 February but it has raised questions as to whether similar steps could be taken in other older shopping centres where exits might be regarded as too steep for disabled people in the event of a fire or other event requiring a speedy vacating of a complex.

As far as the situation at Grosvenor Shopping Centre the concerns of the fire service appear to have been met. “We have been able to reach agreement with the owners of the Macclesfield Grosvenor Shopping Centre on interim measures to ensure the safe evacuation of those with mobility issues from the premises and we believe that the centre is now fully open,” stated Simon Gibbins, Head of Fire Protection, Cheshire Fire and Rescue Service. “We will now continue to work with them to reach an agreement on a permanent solution which will fully satisfy our concerns on public safety.”

The owners of the centre have been more circumspect and believed it had acted in the best interests of all concerned. However, it was written to by the Equality and Human Rights Commission which criticised it for not acting within the letter of the Equality Act. ‘Service providers have a responsibility to plan in advance for the needs of disabled people and ensure they can get in and out of their premises safely,’ wrote Lord Holmes pictured, Disability Commissioner.

Other points that have been raised concerning Grosvenor Shopping Centre is that no disabled person is employed there in any capacity and why no attempt was made to contact the Shopmobility scheme prior to implementing the partial ban.

Picture: Grosvenor Shopping Centre in Macclesfield imposed a ban on wheelchair users and other mobility impaired people without any warning