Whole of Japan Does Disaster Drill 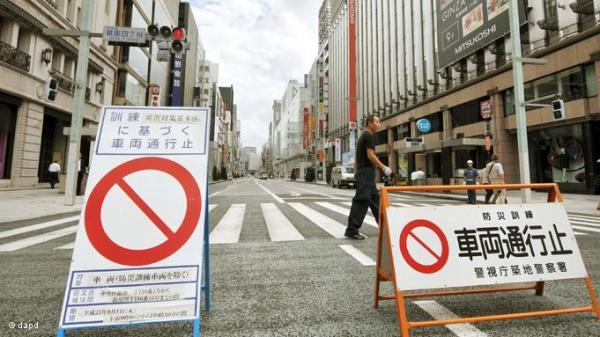 The tsunami that hit Japan three years ago highlighted how vulnerable the country is to earthquakes and its Disaster Prevention Day this week showed the lengths to which it goes.

It was estimated that 2.35 million people took part in a national drill this Monday as part of Disaster Prevention Day.

This event was not from the earthquake and subsequent tsunami that killed 19,000 and devastated Northern Japan. In fact, the rehearsals are held as a direct consequence of the Great Kanto Earthquake on 1 September, 1923 which killed 140,000 people.

So-called ‘dry runs’ are held each year throughout the country to replicate what might occur should an earthquake with a magnitude of 7.3 on the Richter scale hits, e.g. the Tokyo region. The emergency drills are organised by local authorities and businesses, comprising such measures as ducking under tables to avoid falling objects and the safe evacuation of buildings.

The Japanese government has been keen to ram home the message that Disaster Prevention Day should not be just about dealing with the earthquake itself but with the consequences as well. Disruption to essential services and supplies are also dealt with and what may appear bizarre to us, for example, the desirability of stocking up with toilet paper. This is because one of the most earthquake prone regions in Japan, Shizuoka, produces approximately 40% of the nation’s toilet paper. Seismology experts have warned that there is more than an 80% chance of offshore earthquakes occurring in this region.

Government members took part in Disaster Prevention Day with the Prime Minister, Shinzo Abe, even holding a mock press conference where he told the public: “Please try to obtain accurate information, help each other by following the instructions of relevant organisations and stay calm. Please refrain from hoarding food or daily necessities.”

So, from the highest ranking in the land, through to school children the message is the same of being prepared for the worst in terms of natural disasters. (Japan is also susceptible to violent typhoons and landslides, one of which recently hit Hiroshima.) As 1 September is the day for returning to school after summer holidays, many carry out evacuation drills as part of opening ceremonies for the new term.

In a globally connected world, a great many companies have staff that travel both locally and overseas, making it more important to have an effective emergency...

The 20 year old who climbed to the twenty-first floor of the Trump Tower and campaign headquarters of the man who would be king/president - Mr Donald Trump - is said to...

Civil unrest is significantly more disruptive to business in France than in any other western economy, reveals a new global index released by Verisk Maplecroft, which...

Guidance to help businesses to re-open and operate safely has been published by the government. Back in March, the government unveiled its original Coronavirus...

After the government unveiled its Coronavirus action plan, following a growing number of cases in the UK, it’s more important than ever that the FM sector continues...